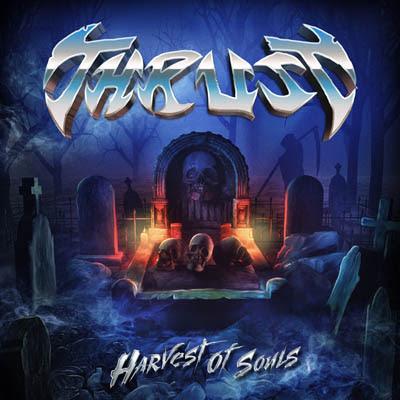 The first single of the US-Metal Band THRUST – “Sorceress” was released on Soundcloud. The release date of the new THRUST album „Harvest Of Souls” on CD is April 27th, 2018. The pre-order phase will start on April 13th, 2018 in their webshop.

Thrust started in 1981 with the live ep “ROCK FOR POLAND” followed by a appearance on “METAL MASSACRE 4”. Followed by the classic “FIST HELD HIGH featuring the underground hit anthem “Posers Will Die!!”. Thrust than released a bootleg called “INVITATION TO INSANITY” followed by the double album in 2015 entitled “FIST HELD HIGH/REINCARNATION (Ultimate 35th Band Anniversary Collection)”. Be sure to catch the new album ‘HARVEST OF SOULS” and THRUST on tour in a city near you!!!