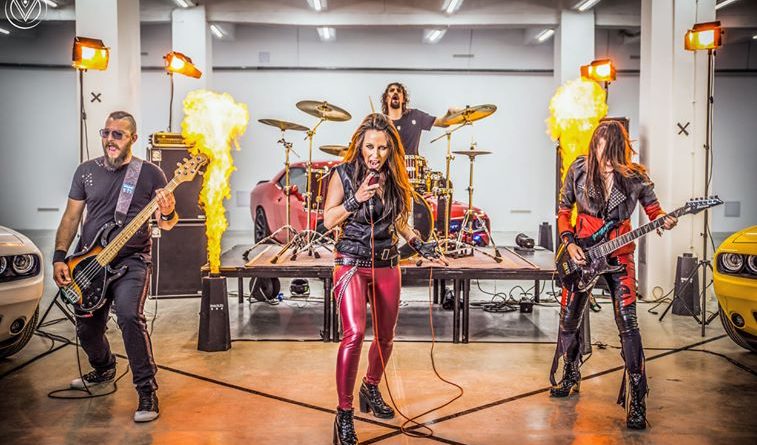 The  new single of the Bulgarian band SEVI  is out now. The band presented the new video with a special show for the fans. The concert took place at Sofia Live Club (Sofia). The song is part of the third album of the band – „Follow Me” (elease date March 09th)

Soon after the collaboration with Thomas Vikstrom ( Therion ) – “The Art of War” was presented on  Radio and TV, SEVI surprised the fans with a new video with the second special guest in their new album – Jen Majura (guitarist Evanescence). Jen spent two days in Sofia in April especially for the video shooting. The musicians have chosen a fast, dynamic song with a strong riff and a hit sound. The video contributes to the feeling of speed and power with the presence of several American cars, dynamic footage, special effects and emotional performance of the musicians.

Director and screenwriter of the video is Emil Tsonchev, who worked with SEVI on projects such as “Do not hesitate”, “Destiny”, “The Call” and others. Jen Majura herself shared the video on her social networks, seconds after the official YouTube premiere.

The guitarist will return to Bulgaria for a concert with Evanescence on September 11th and SEVI are heading to some big summer festivals along with names like Disturbed, W.A.S.P.  and Sonata Arctica.

German melodic metal band FREEDOM CALL releases a new single and video for the song “111” today. The song is taken from the forthcoming studio album “M.E.T.A.L.”. You can see the video here:

Chris Bay says: “The title of the first single release ‘111’ (with the “perceived” subtitle ‘The Number Of The Angels’) is also programmatic for the album. “’111” is the number of angels in Western esotericism, and it also plays an important role in my life. I come across it constantly, be it the number of my hotel room, a receipt at the supermarket or even my birth date. I’m obviously a ‘one’ person which also means that I’m a ‘light person’.”
The new album “M.E.T.A.L.” will be released August 23rd, 2019  through SPV/Steamhammer as a CD, digipak version, 2LP gatefold version, download and stream: https://FreedomCall.lnk.to/METAL

When gnarly punk, pure metal and the swagger of hard rock meet, it can only mean one thing: the unholy rebirth of Helhorse! The Danes love to rock out with riffs heavier than Godzilla`s balls. Be part of one of the loudest, dirtiest and also most melodic riff fests of the year!

Helhorse have just released a first single and announced the first and hotly anticipated details of their brand new record “Hydra”, due out August 23rd 2019 on Rodeostar Records.

Helhorse on the first single: “Overboard was an easy choice as first single. It has a great opening riff that will hit the listener straight in the neck and the chorus is greater than ever. For sure live this one will become a Helhorse classic and we are super excited about unleashing it onto the world.”