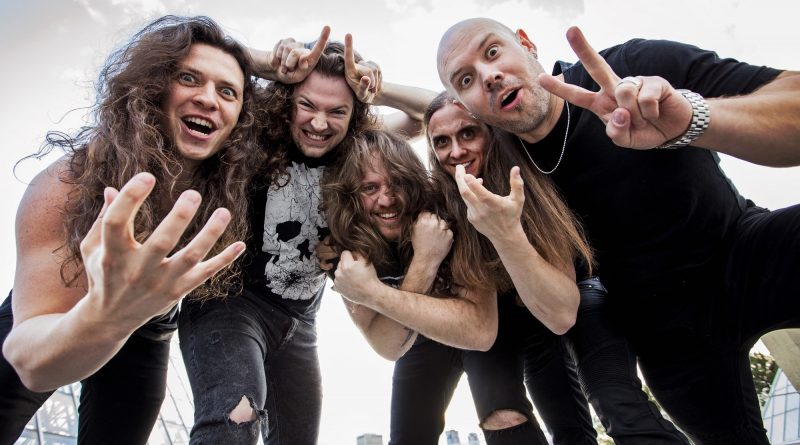 STRIKER Is ‘On The Run’ With New Music Video

As STRIKER continue their ‘Summer of Shred’ tour across North America that recently wrapped up its first leg with DEATH ANGEL earlier this May, the Canadian masters continue their road adventures with upcoming dates in Canada and USA with ANVIL, STEEL PANTHER, HOLY GRAIL and BEWITCHER (all dates listed below). And before they continue being ‘On The Run’ hitting cities across the continent, the band is excited to reveal their new music video in support of their latest sixth studio album “Play To Win” released this past October via their independent label Record Breaking Records.

The band explains the video:
“As an independent band we are constantly pushing ourselves to be better an go farther, ‘On The Run’ is about just that, always moving forward with everything in your life. With this video, we took on some new challenges with our director Lindsay Robinson in programming our own light show and making all of the visual effects ourselves with very minimal computer graphics. We love how it turned out and we are excited to share it. Shred!”

Watch ‘On The Run’ below:

Champions in blending classic heavy metal, hard rock, and 80’s hair metal, Canadian shredders STRIKER‘s sixth studio album “Play To Win” features 10 fist pounding shredtacular anthems produced by the band plus mixed and mastered by Hendrik Udd (Firewind, Powerwolf, Hammerfall, Delain). The album follows their 2017 self-titled full length that the band supported with tours across Europe and North America with Sonata Arctica, Dark Tranquility, and Warbringer along with festival appearances at 70,000 Tons of Metal, Bang Your Head Festival (Germany) and more to add to their almost 1000 shows performed in their decade-plus career. That fifth studio album also garnered them a nomination from Canada’s JUNO awards, the country’s highest music prize, along with wins at the Edmonton Music Awards and Western Canadian Awards.
Guitarist Tim Brown comments on “Play To Win”:“Play to Win: if you want to win you have to play the game. Find the rules and break them. This is our 6th album and 3rd independent release. If we followed the rules and listened to the industry people we’d have gone absolutely nowhere. Play To Win is about listening to yourself, following your own path, and playing that 5th ace hidden in your sleeve. This album is designed to light a fire under your ass and get you moving, and we made sure to get the most modern, ear melting sounds possible. It’s all about where metal is going, not where it has been, and this is our soundtrack to success.”

Founding KISS guitarist and Rock and Roll Hall Of Fame member Ace Frehley has released the music video for “Mission to Mars.”

The music video is entirely animated by artist Christopher Fequiere, a first for Frehley. Chock full of KISS fandom easter eggs, this video is the second music video that we’ve seen from the Spaceman LP. “Mission to Mars” follows the release of “Rockin’ With The Boys” that was released last year.

Ace Frehley released Spaceman last year via Entertainment One/SPV to much critical praise such as Associated Press claiming that Frehley “oozes classic rock style and six-string chops that sound as good today as they did in 1975.” Spaceman charted all over Europe with highlights like Top 20 in Sweden, Top 30 in Switzerland, Top 40 in Austria and Top 50 in Germany and Norway.

“No need to worry, I’ll be home soon, ’cause I’m rockin’ with the boys,” Frehley sings on “Rockin’ With the Boys,” which tells the tale of life on the road. Ace says he wrote the original version of the song back in KISS’s heyday in the ’70s. Both “Rockin With The Boys” and “Bronx Boy” are available on all streaming platforms today and are iTunes instant grat tracks for fans who preorder the album.

In addition to Ace’s distinctive guitar sound on each track, Ace played bass on all of the songs on Spaceman except for two.  The listener might recognize the mighty dinosaur growl of a bass tone belonging to Gene Simmons on the album opener, “Without You I’m Nothing,” which Gene also co-wrote,  and “Your Wish Is My Command.” Both songs were recorded at Frehley’s home studio in Rancho Santa Fe, California.

Ace’s reconnection with Simmons and fellow KISS vocalist-guitarist Paul Stanley (who joined Ace on a cover of Free’s “Fire and Water” for 2016’s covers LP Origins, Vol. 1) might be chalked up to the fact that Frehley has been sober for more than a decade (he celebrates 12 years of sobriety in September). Ace’s clean living no doubt has a lot to do with his productive streak, which began with the release of his top 20 Anomaly album in 2009.

New video from Soom for “Wheelchair”

Slow machine of hate to soberness and impatience to objective reality from the city of Kharkiv (Ukraine), Soom proudly presents their own music video full of fear and loathing mixed with the love to their native city. Made by Anastasia Khomenko, the video tells the story about Djebars, who stuck forever in the moment when clock is working but has stopped on a 19:36 mark. Strong track about wasted spirit for the strong ears commented by the Soom’s frontman Oleksa Kovalov-Blidyi:

“Described story іs based on a Pale aesthetics. It is neither light, nor dark, just immersed in its own Universe, the road to which lies through the searching of drug hiding place, using the “wheelchair” — bad quality synthetic drugs. For one it’s self-destruction, for another — salvation. It just exists and there is must be no attitude, like to anything in Universe, because everybody has its own way to All & Nothing. We see it like an ugly version of beautiful, let everyone of you see the same”.