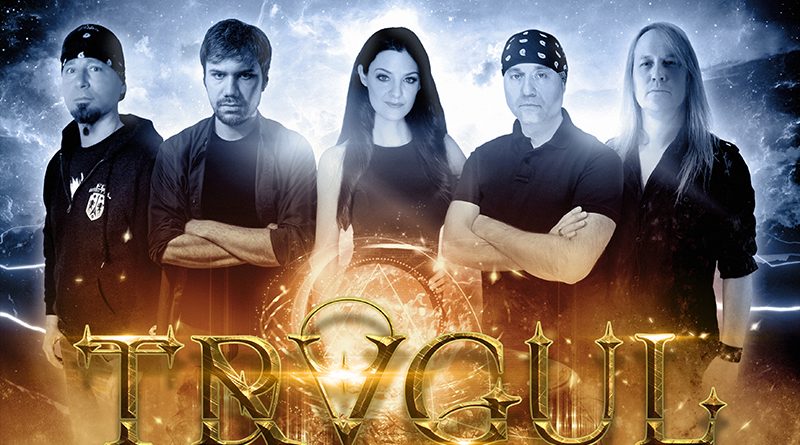 TRAGUL is a melodic metal international project created by Adrian Benegas, keyboardist and composer of the band Pergana. It features the participation and contribution of very renown metal stars such as Zuberoa Aznarez (Vocals), Steve Conley (Guitars), Oliver Holzwarth (Bass), Alex Holzwarth (Drums).
LINE UP:
Zuberoa Aznárez (Vocals) – DIABULUS IN MUSICA
Adrian Benegas (Keyboards) – PERGANA
Steve Conley (Guitars) – FLOTSAM AND JETSAM
Oliver Holzwarth (Bass) – ex BLIND GUARDIAN, ex TARJA
Alex Holzwarth (Drums) – RHAPSODY, SERIOUS BLACK
Now the share their official video to the track, “INTO THE HEART OF THE SUN”. The third release of the band comes with a different musical vision comparing the first two releases (“Bennu” and “The Message”). It offers a more progressive side of the band mixed with the natural and operatic voice of Zuberoa. A high point to mention: the intense rock solo of Steve Conley in the middle of the song. On this new music from TRAGUL, you will find a softer, dramatic but at the same time powerful song. Below you can see the video

The band format consists in a new way of working into the metal scene. TRAGUL releases will come in a “song by song” format, every 1 or 2 months the band will release a new song on Youtube as well with a visual support. After each release, the followers and fans will have the chance to download the songs from the major digital stores and of course, they’ll have the chance to find the music on platforms like Spotify, Deezer, iTunes, and many more.

Portugal’s Dark Metal pioneers in MOONSPELL are set to release their brand new and hotly anticipated album, titled ‘1755‘, on November 3rd 2017 with Napalm Records.
The band’s 13rd studio record will not only outclass all standards you have ever heard from your favorite Portuguese before, sung in their native language it’s the musical version of the year of horror when a giant earthquake wrecked MOONSPELL‘s hometown Lisbon. This album is a dark adventure, breathtaking and completely earthshaking!

For the first time ever, MOONSPELL recorded their new album in portuguese only, but there will be one bonus track appearing in Spanish, and today the band has released this stunning version for the song ‘Desastre‘! Dive into the brand new tunes by the masters of dark art and check out MOONSPELL‘s upcoming album- bonus track right here below:

Says vocalist and creative spirit Fernando Ribeiro:
„Desastre is a homage to all our Spanish-speaking fans around the world. In the late 18th century, in our streets a mixture of Spanish and Portuguese was spoken and guess what that’s exactly what we do here! This song is about how the earthquake took Lisbon by surprise and how we are nothing but a a human leave left alone to break when a strong winds blows. Enjoy Desastre, gracias y saludos!“

In support of MOONSPELL‘s upcoming release, the band will be heavily hitting the road this year, while kicking off in Portugal and Spain first, followed by an extensive tour with CRADLE OF FILTH in early 2018! Make sure to catch the masters of dark art live on the following dates:

with CRADLE OF FILTH:

Walter Fornication is a one man, studio project based in Rotterdam, The Netherlands.

“”History Misanthropy” appears as track #7 on the new album: ‘On A Journey Through Time
And Space’. It is an Old School Death Metal/Morbid Angel kind of song, which follows the same kind of structure and tonal scales as ‘Politics Of Hate’ on the first demo album: ‘A Revolution’s Dawn’. The song deals with the hate indoctrination of the youth (Hitler and SS Jugend) by the nazis during the Second World War and the shameful role of the Catholic Church during this period, which completely abandoned its values and chose to collaborate with the nazis.

In the end the song states: ‘Still mankind’s cruelty goes on and on…’, meaning: humanity has learned little from history as mass hate indoctrination by religion, the media, certain kinds of ideologies or whatever kind of form still goes on till today.”

“The Dark Ages appears as track #4 on the new album: ‘On A Journey Through Time And Space’. It is a Melodic Death Metal song with Iron Maiden and Rush elements.

The song is basically an epic journey through early medieval history. After the fall of the Western Roman Empire in 476 AD, when the Gothic King Odoacer dethroned and banished the young child emperor Romulus Augustulus, Western Europe erupted into chaos with several factions fighting over power and dominance. Who will be the one to restore the might of the fallen Western Roman Empire and restore peace and prosperity on the continent?

The song follows the tale of the Franks and starts when the first Merovingian Lord Clovis the 1stbecomes king of the Franks with the help of the pope and the rest of the clergy and sets a whole Frankish dynasty to rule the Frankish empire. After several decades the Frankish dynasty, however, realises that their power is threatened by an Islamic, Moorish force from ‘Al-Andalus’.
At the Battle of Tours, a.k.a. the Battle of Poitiers the Frankish general Charles Martel finally defeats the Moors in order for the new Frankish Lord Charlemagne to become king.

Charlemagne succeeds in uniting the whole of the Frankish Empire and rides to Saxony (Northern-Germany) to dominate the Saxons, ‘With a sword in his hand’. Eventually he becomes the first emperor of the new ‘Roman Empire’, ‘The Holy Roman Empire’. But, it is only when Charlemagne lies on his death bed and his empire is divided in three that his people realise all the deeds he has done and that they will probably never see anyone again in their lifetimes that will lead them away from the darkness into a new day.”