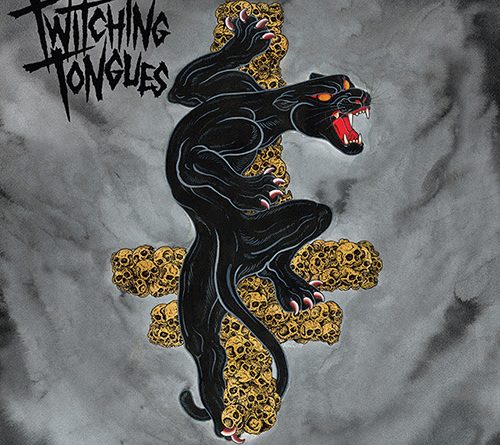 You can head to metalblade.com/twitchingtongues where the record is also available for pre-order in the following formats:

The title for Twitching Tongues‘ fourth full-length, Gaining Purpose Through Passionate Hatred, was drawn from a quote by famed social philosopher Eric Hoffer – “Passionate hatred can give meaning and purpose to an empty life” – and it reflects the band’s mentality in approaching the record: paying homage to those who supported them while belligerently responding to their detractors. With “failure” as a core theme driving Colin Young’s lyrics, it also features his first foray into the political arena, motivated by the contemporary political climate to speak his mind. Directly inspired by film scores, the record has a strong epic feel, the band realizing their vision of having the music flow like a story being told. With interconnected parts, musical references and callbacks in each song, everything is tied together in a manner unlike any of their previous releases. At the same time, while maintaining the same levels of hardness and aggression that has characterized their later work, it features much more immediate and memorable melodies, which evoke the sound of In Love There Is No Law yet at the same time feel fresh and new.

BENIGHTED are premiering the second video for a track taken from their latest album, ‘Necrobreed’, which features SuicideGirl Cecylia Suicide alongside French actor Matthieu Ambid, who already starred in the previous “Reptilian” clip.

The French brutal death veterans are now streaming “Leatherface” below:

Credits
Video creation: Kick Your Eyes Productions
Female lead: Cecylia Suicide
Male lead: Matthieu Ambid
Vocalist Julien Truchan comments: “We are proud and stoked to unleash this new creepy episode of our ‘Necrobreed’ story in the shape of a music video for the track ‘Leatherface’! Kick Your Eyes Productions once again did a great job and delivered this second piece of insanity starring the gorgeous Cecylia Suicide! Enjoy!”

San Francisco Bay Area metal titans MACHINE HEAD, will release their highly anticipated new album »Catharsis« on January 26 via Nuclear Blast Entertainment. Now, the band has released the brand new track that you can see below:

“I feel like metal could really infiltrate the mainstream with this album. And it needs to… now more than ever. A lot of consideration went into making these songs more identifiable to a wider audience. Simplifying ideas, simplifying hooks, really concentrating on story-telling as opposed to ‘brutal poetry’ or whatever. And while I’d love to say it was all some grand plan, there was no ‘plan’” Flynn adds laughing. “You never know where you’re going to end up whenever you start writing a record… you just write… but I tell ya what… we ended up with a landmark here. Whenever you finish an album, you always feel proud, but this time… we’ve got something really special. We can feel it. We know it. »Catharsis« could really elevate our genre.”

To purchase or stream ‘Beyond The Pale’, ‘Catharsis’ and ‘Bastards’ go to: http://nblast.de/MHBeyondThePale