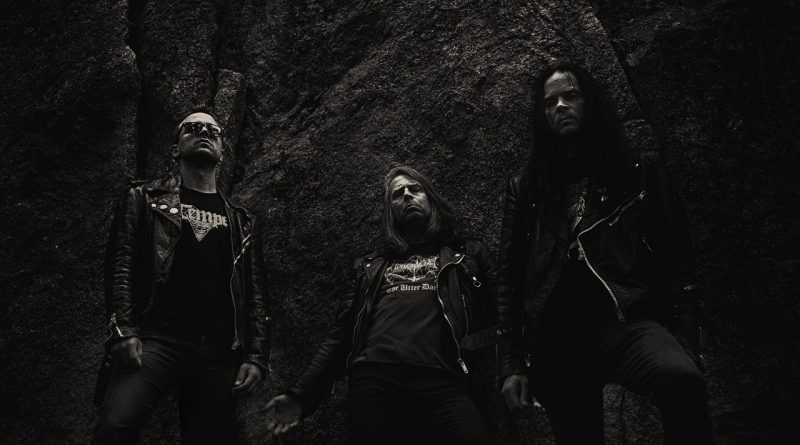 In anticipation of their new album “Interregnum”, the “out of the ordinary” progressive death metal Sweden’s USURPRESS release a six-minute video documentary portraying their ucpoming release. The movie was filmed by Jimmy Johansson (Super Lino Puro). Watch it here:

“Interregnum”, the band’s fourth studio album, is set to be released on February 23rd via Agonia Records. Listen to a debut track at this link.

This time, core members Stefan Pettersson (vocals, lyrics), Påhl Sundström(guitars, music) and Daniel Ekeroth (bass, music) are joined by jazz-fusion drummer Stefan Hildman and ambient/trance keyboardist Erik Sundström, and the outcome astounded even the band itself. “Interregnum” can be described as “an unholy mix between Camel and Bolt Thrower, that somehow works flawlessly”, so be prepared for something quite out of the ordinary. And out of this world.

The video/single was created by Romanian artist Costin Chioreanu, who worked before with acts such as At The Gates, Mayhem, Grave, Deströyer666, Absu and Vader , among many others.

“Labyrinth” it’s a glimpse into new Lefutray’s songwriting, more suffocating, heavy and very, very dense. We choose this song because we think it’s the best way to show to the fans of our music a preview of the upcoming work, and how the new songs will mark some kind of difference regarding our previous records”comments Cristian Olivares, guitarist in Lefutray.

You can watch it below:

These days, the band is recording the album which will be released during the first semester of 2018. “A very hard work in the studio, we’re focused in to capture the most intense and heavy atmosphere as possible, and some of that enviroment it’s something we think the fans will find in this first approach to the new album, our fourth release”, Olivares said.

The name, artwork and tracklist of the new album will be revealed within the next weeks.

Symphonic metal combo Elegy of Madness are glad to release their lyric video for the song“Lunacy”, taken from “New Era” (2017 Opera Core / Wormholedeath).

The band stated:
“Here we go again! We are pleased with our third video clip, coming after Apokalypsis and Nobody Cares acoustic version. This is Lunacy lyric video for all our fans around the world! Stay metal!”