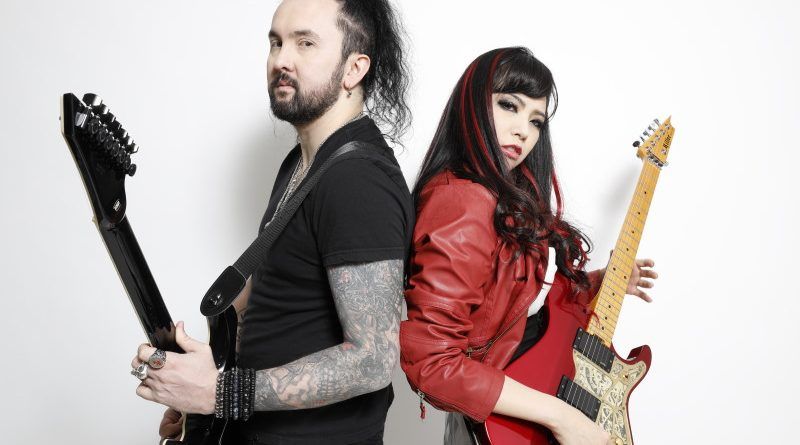 Amahiru it’s a name, probably unknown to a lot of our readers, but what if we told you that this new band was created by Frédéric Leclercq (Kreator and ex-Dragonforce) and Saki (Mary Blood)? And they’ve released one of the greatest surprises of 2020? You can check out the review here. We checked in with Frédéric and had a nice chat about this new force in metal and how it all began – even shedding a light about why leaving Dragonforce. By Fernando Ferreira // Photos by Takumi Nakajima

Hello Frédéric and welcome back to our World Of Metal. It’s great talking to you again, now with a completely new project. How did it all started?

I met Saki back in 2015, when her band Mary’s Blood opened for Dragonforce in Hong Kong. We kept in touch-I go to Japan very often, not only for gigs but also on vacation and I guess we both started thinking about playing music together until we decided to make it happen in 2018. Then we contacted Coen, Mike and finally Archie and… here were are.

I said Amahiru is a new project but it feels like a new band, so organic this album feels. Do you see it as a band instead of a studio project?

I see it as a band. First of all I dont really like the term «project » because usually people think its not as “real” as a “band”… but yeah, I agree with you, it sounds very organic, because the chemistry between the musicians is here and that’s not something you can fake. I always choose to play with people I emotionally connect with first and foremost, as opposed to just contacting known people I barely know and ask them to play with me; that would be possible of course, but whats the point? So all the people in this band are friends first and thats why it sounds so organic

We can say that most of the writing was made between you and Saki, right? Having so much in common musically, was this process easier than the other writing experiences you had in the past?

Yes, Saki and I wrote the music and Archie and I took care of the lyrics. The process was fairly easy! As soon as we agreed on creating Amahiru, I had ideas I started piling up. Saki would send me songs, I would send her my songs, and that was cool, but I felt like it would be even better to be in the same room to really exchange ideas and finalise the songs together. So I flew to Japan and spent three weeks there with Saki, and by the time I was on my flight back to France, the album was written. There was no issues, no egos, we both wanted to go in the same direction, so there was no need to compromise or try to follow a formula like it might have been the case with Dragonforce: DF has a name, a recipie, and you kinda have to accept the limitations. I’ve tried to push the enveloppe as much as possible on “Reaching into Infinity”, and then their last opus was definitely a kinda “back to the old DF” which I didn’t agree with-We were arguing all the time and I couldnt see myself happy artistically. So yeah, Amahiru has been very refreshing, and a lot of freedom (which I already had with Sinsaenum. Once you taste freedom…

You got Coen Janssen and Mike Heller to join Amahiru, how big was their impact on the final product?

I will say it definitely wouldnt be as good! I produced the album, meaning I was overseeing every step of the making, arrangements etc, so I gave Coen and Mike little direction here and there but mostly they came up with great ideas I didnt think of, as well as their style artistically. So yeah, without them it wouldnt have been the same!

One of the good surprises of the album, besides having you and Saki working together, was Archie Wilson’s voice. How did you get to know him?

I met Archie through mutual friends. Just like I was saying earlier, being a musician I get to meet a lot of musicians and when they are friendly and talented, I kinda make a mental note like “hey maybe someday we should play music together”. (Laughs) And so thats what happened here: we originally were going to make the album with Marc from Dragonforce, which was easy, he is a great friend, and has a great voice. But somehow the material we had made me feel like it wouldnt work with  Marc. We needed something different. and then one night I was lying on my bed in my hotel room in Tokyo, thinking about the album and the direction etc.. Ding! light bubble, Why not asking Archie instead? I sent him the demo of Bringing me Down, and he sent it back the next day with his vocals and we were sold. straight away. like the missing piece of a puzzle. Everything just made total sense. All the songs linked together with his great voice. So yeah, Im glad I had that light bubble moment.

I know that the album was recorded last year but I’m curious if the current pandemic world wide status had affected any of the plans you had for the release.

Well… we wanted to release the album in the summer, and last time I was in Japan (Feb/March 2020) we were talking with Saki about european summer tour, doing small shows, see how it would work with Loudblast, Kreator, etc…Japan was already cancelling some festivals but we didnt think the whole Corona virus thingie was gonna last.. so we were planning, and everyday the situation was getting weirder but still, and then I flew home, directly to do the video with Kreator, and by that time we werent sure if that tour with Lamb of God and Power Trip was going to happen…I remember saying bye to Mille, getting out of the taxi, and then getting a text message from my wife saying « France is stopping shows with more than a 1000 people » – Kreator was supposed to play Olympia which is like 2500- so I ran back to the taxi and told Mille and we were ‘ho ho’…. and then.. everything kinda stopped. so we had our time to push the album a bit and make things right.No rush when you dont even know if you are allowed to leave your house next week uh!

You also had the participation of Kifu Mitsuhashi (japonese musician that plays the shakuhachi, a traditional japonese instrument). Was working with him a long time desire?

Very much so, Saki got in touch with him and made it happen and we were both very excited to have him on the album – he is a master in his category so its a huge honour for us!!!

These are troubled times that we are all facing, but specially those who lives and breathes music. What do you think will be the near future for our metal scene?

I have no idea-no one knows. I think, just like for all categories, only the strong will survive this situation we are facing right now. Small businesses are suffering, and its the same in music with small bands… So I dont know. Maybe these online things will developp, cos its cool-Kreator has done a Wacken virtual show this summer and it looks great, it came out really cool. but nothing beats the real experience of a live show, the interaction with the fans, the sweat… and right now we cant have that so we have to wait.