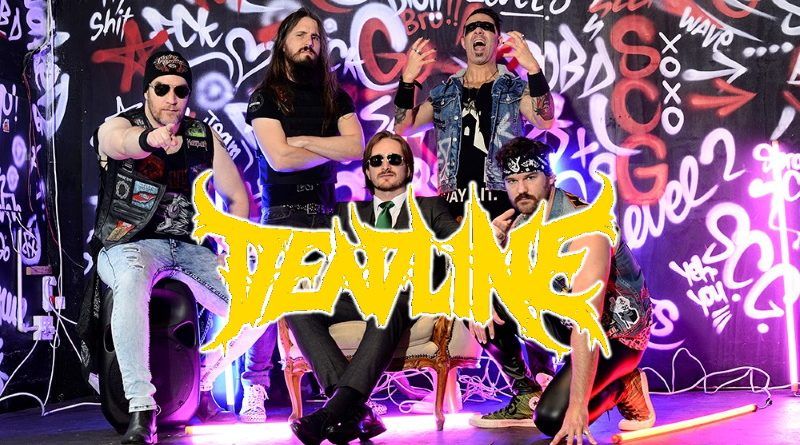 Deadline is one of the hottest traditional metal proposals from South Africa and they’re about to unleash their new EP, “Abigail’s Crypt”. To mark the occasion, World Of Metal not only got to talk with founder and frontman Jessy Switchblade but also bring in first hand and exclusvely the above mentioned EP full stream. Enjoy!

Hello Jessyand welcome to our World Of Metal. “Cathedral Point” was released almost a year ago. What balance do you do about its recepcion and how it worked on the growing and evolution of the band?

Thank you very much for having us and for taking the time to interview us. I think all in all for an album released right in the middle of the lockdown, the album did well and the reception was great. We did a live stream to promote the album the day after its release and so many people bought tickets worldwide, something we never expected and are very humbled with. The album itself was a heavier, faster paced album and I believe has set us on our way to the next installment of Deadline. We aim to get even heavier with album no 3.

It was released when the world was starting to learn to live with this pandemic, did you pondered to delay the release at the time? What kind of promotion where you able to do for “Cathedral Point”? Were you able to play some gigs?

It was tricky as we were unable to tour the album but with the help of David Devo Oosthuizen, whom we use for our PR we were able to punt it as best as possible. We did do a live stream on 27 June 2020 which was well received and we had viewers from all across the globe. As soon as the country re-opened temporarily in September 2020 we played two gigs, albeit with a capped audience due to the Covid regulations.

You had some recent changes in the line-up, with the exit of Raven Chaos (guitars) and Baz Steel (bass) and entering Damian Dread (bass). Can you shed us some light on what happened?

Well Raven was always going to go. That is why we drafted Judge Mental into the fold. With the lockdowns being imposed his departure just took longer. As for Baz, he did have some personal issues he needed to take care of and decided that his journey with the band was up. Damian is a good friend of the band and we had a few conversations with him and he was only too happy to join on the bass. He does have a technical death metal band where he plays guitar and is the principle song writer called, A Nameless Dread. In fact I have seen a few segments on his band on WOM. \m/

Have you any plans for returning to the three guitar ensemble or for now you will stick with only two?

No, not at all. We will remain with two guitarists. We became a three axe metal attack whilst we waited for Raven’s emigration. Once he emigrated we were ready to return to two guitarists.

You’re about to release “Abigail’s Crypt” an EP of covers and some versions of your own songs but before we dive on that, why release now this EP? Is this the time perfect to release this kind of release to maintain the band’s name presents on the metalheads all over the world?

It really just is a fun stopgap project while we finish writing album no 3. We found that we waited too long inbetween albums so this is just a little project to get more content out and keep everyone still vested and invested in our band.

I love covers, to hear new interpretations of classics and even being able to know new old songs and expand my knowledge. Now I believe you guys must have tons of influences and songs that you wanted to play. Was it easy to reach these final three?

You also gave new life to old songs of yours, “Break The Silence and High-Tops And Bullet Belts”, in acoustic fashion and with an retro synth feel respectively. How did you thought on these experiments?

I supoose the idea behind it is to show everyone as well as our loyal fans that we do not want to be boxed into a genre and that we are not a one dimensional band playing purely old school heavy metal. ‘Break the Silence’ was written against child abuse and we feel this acoustic version is a very poignant passionate delivery of the message. As far the as darkwave/synthwave rework of ‘High-Tops & Bullt Belts’ is concered it was done with a bit of irony. The song is about the glory and splendour of heavy metal but also about how bombastic the 80’s were. Synthwave is a genre that pays tribute to the 80’s and we thought our fans would appreciate something different and fresh like this.

I’m really curious to know how is the traditional heavy metal scene on South Africa and how it was affected by the pandemic.

The South African metal scene is a pretty small scene that has ebbed and flowed over the past few years. With the Government imposed lockdowns the scene has sadly gotten smaller as many venues have closed and bands split up. We are lucky enough to be from Pretoria which is 50 kilometres away from Johannesburg in the province of Gauteng and it currently is the biggest hub for heavy metal in the country. In a way I feel we haven’t been affected too much by it but smaller crowd attendances and stringent regulations do make it hard for party goers to go out and enjot the bands and music.

Next plans, still bet one promoting “Cathedral Point” or will work on the next album?

We are currently 2 songs into our new album. We have another 5 or 6 in the works. The plan now is to knuckle down and finish writing same so that we can enter the studio end of 2021. Thank you very much for affording us this opportunity to talk about our band on your platform. HAIL & THRILL and stay safe!!