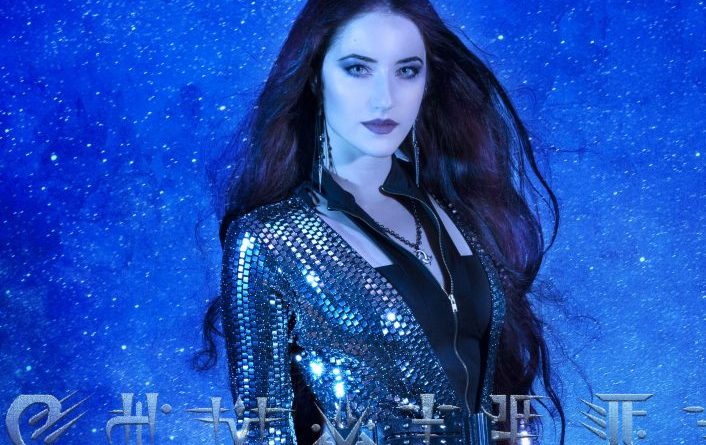 Edge Of Paradise from the U.S.A., are back with “Universe”, an album full of personality and that promises to conquer what has not yet been conquered! We talked to Margarita, the friendly vocalist who told us a lot about the band and of course, about “Universe”. By Miguel Correia

Hello Margarita, thank you very much for the opportunity of this interview and of course, it is with great pleasure on our part that it happens … finally!

Thank you very much for having me, it’s my pleasure!

Well, congratulations on the new album, and when I give you a 10/10 in my review it was because “Universe” is one of those albums that you can’t miss. How has your work feedback been?

Thank you so much, we really appreciate the support! So far, the response has been awesome, and we are grateful and excited that our world is growing! We had a great EU tour, supporting Sonata Arctica, recently we hit a million streams on Spotify and the music opened us up to a lot of exciting opportunities.

I often make an observation of the genre: many of the bands of today have to be concerned with the quality of their work and try to create originality. I feel that with Edge Of Paradise, of course it feels like another cliché, but above all it is a sound with a lot of personality. How do you define Edge?

I would define us as a melodic hard rock band with an industrial/electro and symphonic edge! Our music has evolved a lot over the years. I think being in the band for 8 years, all the mountains we overcame, all the experiences we’ve shared, it really fuels the music. I also love to write about something that’s beyond our physical existence, something that makes you think and wonder, but also empowers and inspires. Also, I think having different backgrounds with Dave coming from rock/metal roots and me from classical music and theater, learning how to compliment each other and write together, really solidified the foundation of our sound. And exploring the industrial/electro/symphonic edge, just ads another element to the music. But ultimately, it’s all about sharing a piece of our soul with the listeners and taking them on a ride through our universe.

There is a combination here that I find fantastic, which is the soft tone of your voice with the weight, the power of everything that surrounds you. For example “Fire”, is one of those themes that no one expects with such an angelic beginning. How do you work with the composition?

I’ve always loved contrast, with our songs we try to take a listener on a journey. Life is all about the highs, the lows, the thrill and excitement, fear and conquest, hope… All these emotions we aim to capture in the sound and that’s how most songs come to be. We’ve never really forced a song, that never works, once there is an idea, we let the music write it self fueled by inspiration and emotion…

And how do you define “Universe” as an album?

Its a hard rock album with industrial, electro and symphonic textures. It’s driven by melody, lyrics and electrifying grooves! The songs are massive, cosmic, dynamic, moving, edgy, exciting and enticing!

What distinguishes you from previous works? I personally find him with more musical maturity…

We definitely matured as musicians and songwriters. It’s by far our best work and we’re excited to continue the evolution. What also elevated this album is the production team. Our songs have a lot of layers and we wanted to get a polished clear sound, but still have a raw edge to it. Working with our producer Mike Plotnikoff, he was very helpful with the recording process. Dave and I do a lot at our home studio, but drums and vocals we recorded at Mike’s studio and he does a phenomenal job getting the sounds and always knows the right thing for the song! And having Jacob Hansen mix the album, he brought the songs to life, whatever he did to the mixes, just elevated the album to a new dimension!

What are your musical influences and to what extent do they end up being in your head when composing?

I grew up on classical music, until I was about 15, I played piano on a serious level, with concerts, competitions, I wanted to be a concert pianist… In college I started to get into hard rock and metal, I loved Symphony X (which a lot of their songs are influenced by classical music…) I’m really into Nine Inch Nails, Korn, System Of A Down, Dio, Rammstein… When I write music, I try not to force anything, but I would imagine a lot of the ideas I get for melodies are subconsciously inspired by years and years of playing classical music. And all the industrial/electro textures in our songs, I love experimenting with sounds and rhythmic elements, giving the songs a unique edge. With Dave, he comes from more of a rock/metal background, he grew up playing Van Halen, Steve Vai, he loves Iron Maiden, Black Sabbath, Rammstein, Korn… I think our different backgrounds mesh well together, it took us a while to really figure out how to write together and compliment each others styles, and I’m really proud of what we did with Universe, it’s something very special and I can’t wait to see what comes next!

For you as a vocalist, who are your biggest inspirations?

I’ve always been a huge fan of Ronnie James Dio, for me, the most important thing is to make people feel, send a message across, inspire and empower. Dio was a master of fueling each word with immense emotion and feeling, and that’s what I always aim to do with my singing!

And how and when did it start?

Dave Bates (guitarist) and I formed the band back in 2011. We met when we were hired to work on a project by a local producer. When we talked, we both wanted to create something unique, that we can both be solely dedicated to, and take it all the way, so Edge Of Paradise was born! Our debut album was called Mask, it sounds nothing like us, and most of the songs on there were written by Dave and Robyn McAuley. Great musicians on there, Gregg Bissonnett and Tony Franklin as rhythm section… Then came our second album Immortal Waltz, that’s the album with our song In A Dream, that was the first song Dave and I wrote together and we always close our show with it, it’s still one of the highlights of the set. We were lucky to have recorded the album with the legendary Michael Wagener in his studio in Nashville. It was an amazing experience, and he really put us on the right path to discovering our sound. Then came the ALIVE EP, that’s probably the closest to what we sound like now. From there, we followed the natural evolution of our music and started to explore more of an industrial/electro sound and set out to create an album that would define the band, that’s how “Universe” came to be.

Look, I can’t stop talking about the current moment that the world is experiencing, as an artist and as a person, how do you see this situation?

It’s a bit surreal what is happening right now. And what worries me is that with the advancements in humanity, bio warfare is an inevitable outcome. Not saying, we’re there yet, but I think it’s very unsettling, how an invisible force can disrupt and dismantle economies. This could be devastating to the music business, not just for artists, but for music venues, tour bus companies, agencies, merchandise companies… there are so many businesses involved in bringing tours to life, so if we have to wait till 2021 to resume concerts, the industry will have to rebuild itself. But we have to stay positive, motivated and find opportunity to keep growing as artists and we need the help of the fans to keep music industry alive. Music is essential to culture, emotional well being, connection, its the language of the world, so we must all come together and support each other to get through this together!

Do you think we will go out to a better world after all this?

I hope so! I think a situation like this, makes us remember the important things in life, value relationships, recognize our values and remember the fragility of life, to be grateful for what we have. I think it might urge us to do more to preserve our environment. Of course, there will be new dangers we will have to face coming out of this. One thing is for sure, we will have a new normal, and I hope we take away valuable lessons and not just revert to our old ways.

I have seen countless band initiatives to try to minimally overcome cancellations and postponements of everything that was scheduled for these months. What do the Edge do to keep the band’s flame burning?

We are still not sure if our tour with Hammerfall will be postponed, it’s supposed to start in mid September, and the best case scenario it will go as planned. We’ve been doing a lot to engage the fans, we’ve done 3 acoustic versions of our songs and just released a video featuring footage from our EU tour.

We’ve been doing live chats every Sunday, making some guitar tutorials, making art for fans… But mainly writing new music for the next album! We already wrote 3 songs for it, it’s a bit of a concept album, it’s the evolution of Universe and will make people think, especially during these times! And Timo Wuerz created the coolest cover for it, so we can’t wait to reveal the next chapter of Edge Of Paradise!

“Universe” is a dimensionally transcendent thing. Is it an inspiring theme line or did the idea for this theme come naturally?

I’ve always been fascinated with the outer space, where humanity came from, and ideas that transcend our physical existence. So, to me this all came very naturally. With lyrics I wanted to empower, awaken inspiration and wonder, with the music we set out take people on a sonic journey through our universe.

Do you look forward to what is expected after all this has calmed down?

I am, across the span of humanity, we’ve always persevered, this too will pass and we will come out on the other side stronger! I can’t wait to get back to touring, connecting with people and appreciating the gift of live music!

Definitely! We almost made it there on our last EU tour, it’s one of the countries I’ve always wanted to visit! So, once the world reopens, we’ll bring our show to you!

Thank you very much, for the friendship and for the interview once again! Wish You The BEST!!!!

Thank you so much for having me, it was a pleasure and can’t wait to see everyone at a show! Wishing you health, joy and lots of great music!