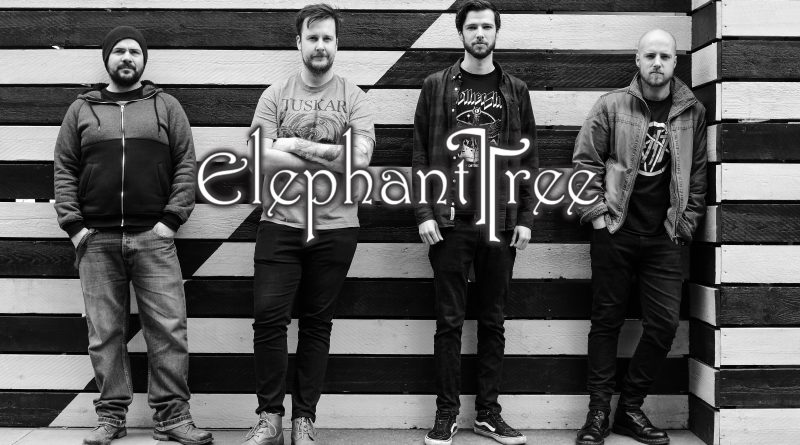 “Habits” was a great surprise for all of those who like to fly away to the sound of good psychedelic doom and didn’t know the british outfit known as Elephant Tree. For those who already knew them, it was nothing more that what they’re expected: just another fine piece of organic music. World Of Metal got to check it out with the band and Sam Hart (drums) Peter Holland (bass and vocals), Riley MacIntyre (sitar and vocals) and John Slattery (guitar and synths) were kind enough to answer our questions

Hello guys and welcome to our World Of Metal. You’re back with “Habits”, your third album. Before talking about it, I would like if you tell us how was this four years before the release of the album. Your sophomore self titled album kept you guys quite busy, right?

Sam – We were definitely kept on our toes. We had tours with Stoned Jesus + Mothership and Lo Pan + Steak, played debut shows in Vegas at the Psycho, New York in St Vitus Bar and also managed to squeeze in a few festivals around Europe as well. We took the writing really slowly this time around, we’re really lucky to have very patient fans.

Was there any kind of pressure after seeing and feeling how well “Elephant Tree” was received?

Pete –  I’d be lying if I said we didn’t feel any pressure, especially when fans at gigs or online chat to us saying things like “you’ve got big shoes to fill there” and “now don’t mess it up!” But you have to take all that with a pinch of salt. Happens at gigs when the band before do an absolutely crushing set, and people turn to you with the “ha! You better do something spectacular” look on there face, and even telling you as much. So yeah, there’s some pressure there, can help you channel the right direction though. End of the day, we write what we write and don’t bow down to what we think people would like to hear. We are our own judges of how we’d like the songs to be and feel, obviously we want people to get on board with our wave, but ultimately we want to get the vibe going to keep our own personal interest in the songs alive.

How would you describe the writing sessions of this album, compared to the last one?

Riley – I think the writing of Habits is the aspect of making the record  that was most similar to the self-titled actually. The rest of the process was notably different, but the approach to writing was more or less the same.

In both cases the band brought in a couple fairly developed songs, a few really clear ideas, and lots of riffs. In the studio the guys would play me the songs and ideas live as a band while we record. As I was hearing them (often for the first time) I would throw out ideas for arrangement, variations etc., and we would try some of them and see if anything felt good. At this point we’d usually listen back to some of it, discuss, see what’s working, and then go back and record some more with a clearer idea. Usually after a little back and forth like this we would land on a solid take of a structure we all agreed on.

With lyrics and melodies we usually all sit around for an hour or two before recording the vocals of a particular song and talk about lyrical concepts and try out melodies and harmonies. With songs that were more developed before the recording stage, we might all have a look at helping to refine the lyrics that already exist, and with less developed ideas we might pass around a handheld microphone and try out words and melodic ideas over the speakers. As we found things we liked, we would put down sketches and quickly build out the tune from there. (I have to say that this method of writing lyrics and melodies is unlike any I’ve seen elsewhere. It is an entirely democratic, supportive, open minded, and remarkably efficient process that I find often yields better results than songs I’ve seen slaved over for weeks.) Once the main melodies and lyrics are recorded properly we’ll start trying harmonies right away. We’ll usually find pretty quickly what works, and whether or not they’re needed at all. Harmonies are often the last thing we record besides production elements, so once those ideas are exhausted that’s usually it in terms of actual writing.

You recorded again in the Church Studios, there’s now doubt about that, right? You had pretty what and how you’ve want to sound.

Jack – Yes, we were fortunate to have recorded and mixed this album in The Church Studios (run by Paul Epworth) with Riley Macintyre at the helm. In that sense we were blessed to have so much great audio equipment at our disposal including a vast array of synths and outboard, as well as a fantastic Neve Console. Needless to say the staff at the Church are also amazing!

This album is quite diverse but yet very tight and solid. All these different aspects, did they just flowed to your music naturally or was there something that you really wanted to try to do?

John – I think the diversity of the album is a reflection of our collective musical tastes and influences. As a group, I feel we are quite open to writing songs, making suggestions openly and just experimenting. I think people who have been waiting for us to release can definitely attest that we have taken our time to experiment with this record! Riley and Luke (Pickering – mix engineer) have done a great job at making sure that the record sounds great – with so many different things going on it could definitely have been chaotic!

You’ve also changed labels to Holy Roar Records. What was the decisive aspect for choosing working with them?

Sam – After working with Magnetic Eye Records we really just wanted to come more local. Mike and Co worked really hard to make things happen with the last two records, and we’re really grateful for that, but it’s always hard when you just want to have a face to face and catch up with them being over the other side of the pond. Holy Roar were known to us before and we really digged what they were putting out. We put out some feelers to a few friends and other European labels but ultimately they won out based on track record and location. It also helps that Alex runs a beer shop so we’re hoping to get some cheap cans out of it as well…

The album isn’t out yet, but did you already had any feedback about it?

Pete – We’ve seen a fair few review crop up, and the response has been pretty damn good so far. Getting personal messages from some friends that write for magazines and blogs just to say how much they personally enjoy it as well, which is really quite humbling. They have noticed that the lyrics are a little darker, the voices are stronger, and the production is well and truly polished!

Two singles have been released, and the reactions from fans old and new have been great, reaching a few different circles as well because the style of the tracks isn’t as “true doom”, so some fresher ears pick up on the more calmer psych vibes. But hey, these are 2 tracks out of 8 that are on the album, we guarantee there are heavy riffs on there that should satisfy the fuzz hungry 4.20 lovers out there.

It’s inevitable to talk about this even though we all are tired probably of this topic, but how big impact did this Covid-19 plague on Elephant Tree?

John – It has definitely been a bit of a disappointment. We were just about ready and really looking forward to bringing ‘Habits’ on tour this summer, which we will now not be able to do – at least for a while. I don’t think we can really be too down about it given there are so many people who have had their livelihoods and health swept out from underneath their feet. Our thoughts are with all those affected at the minute – in music and beyond. We will just have to wait a little longer.