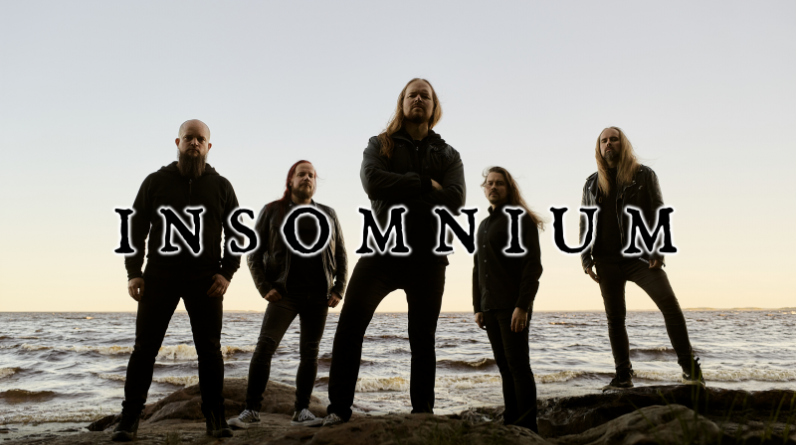 The end of the year is coming and it’s time to make the usual best albums of the year thing. Here at World Of Metal, we’re beting that Insomnium’s “Heart Like A Grave” will be featured in many of those lists. This album is simply killer and one of their best! So, obviously, we had to check with Ville Friman, guitar player of the finish band for a little chat. – By Fernando Ferreira.

Hello guys and welcome to our World Of Metal. Great honor to talk with you when you’re about to release the much awaited “Heart Like A Grave”. Before talking about the new album, I have to ask you, did you felt this anticipation from the fans? It were only three years, but I feel the expectations were/are high. Did you felt any kind of pressure, for this one?

Well not really from fans but of course we wanted to come up again with a great album after Winter’s Gate. In that sense there’s always that pressure from yourself to keep the standards and quality high, not to repeat oneself too much and keep it someway interesting and “fresh”.

This album closes two decades in your career since the beginning with your first demo. Did you ever stop to think during the writing and recording of the album something like “damn, we’ve been doing this for twenty years now”?

Well, it has definitely dawned to us many times that we are not exactly the new kids in the block anymore (laughs) And maybe none of us imagined that we would be doing this still 20 years after releasing the first demo. We were pretty much kids back then and world certainly looked different. But 20 years has went quite fast and it’s cool to realise we’re still here and there are still people who are interested in what we do.

One thing that instant to notice is that this album is more direct to the point in the melodies and in the hooks, even on the long songs. After the really great extravanganza that was to make a record like “Winter’s Gate”, did you all felt the need to do something different?

I think we did not consciously aim to do something different but just continue doing what we’ve been doing and developing for the past 20 years. There was no intention to reinvent the wheel or anything but keep it interesting and try to top ourselves in terms of song writing and maybe it is just all these kinds of small things we did bit better this time around.

You reach this album also with a new member, Jani Liimatainen, leaving you with three guitar players. Did that change some aspect of your songs? Explore some harmonies now that you have three guitars, or the fact Ville can’t tour anymore prevent you to try that?

We rehearsed all new songs with three guitars, so we did arrange some things for three guitars already then. We also did one festival this year with three guitars and tried some old songs as thee-guitar versions then. We’ve always had lots of guitars on album since our debut and now we will be able to deliver three guitar-attack every now and then when I’m able to join on tour.

“Heart Like A Grave” sounds majestic and powerful, with a clear and defined sound. You’ve decided to work with Jens Bogren. Being the first time that you work with him. Was he someone who you wanted to work for a long time?

Yes, this was the first time we worked with Jens even though ‘Shadows of the Dying Sun’ was also mixed at Fascination Street by Andre Alvinzi. Jens has his own trademark sound and he really did great job with the mix and mastering.

Lyricwise was some global focus of what you wanted to talk about? The north seems to be the focus…

North and Finnish melancholy in general are definitely the strongest general concepts on the album. Lots of inspiration was drawn from more contemporary Finnish artists, musicians and writers to come up our own interpretations on universal themes covering, love, longing, sadness and bitterness.

The band seems to be on its maximum force. On the beginning I’ve asked if you felt the high expectations of your fans, now I must ask what are your expectations to this album and the impact it will have on your career?

Of course, we hope for good reviews and that our fans will like it as much as we do ourselves. It’s always nice to see good chart positions and hopefully all this will catapult us one or two levels up in rankings.

The touring schedule, that begins on November, is almost packed to the end of the year. Is the plan to tour as much you did on the last one or even going and growing further, to places where you’ve never played?

The idea is to do as much touring as possible and go through good old places around Europe and USA but to also go to new uncharted territories around the world. For example, we’re looking forward to go to South America for the first time in our career and hopefully make it happen this time around.

Insomnium’s music brings always a sense of union between melody and epic power. If you would have to name, and to finish off the interview, what would be the band that do this union as well as you guys? Not necessarily an influence of yours…

I guess I would have to mention early Opeth, Amorphis, Sentenced, In Flames and Dark tranquillity. These are bands we listened a lot and they definitely moulded our sound heavily. But naturally, there are so many influences covering all styles of musical styles, which makes it impossible to disentangle where our influences come from nowadays. Maybe it is the mix of everything combined with fairly straightforward metal that results in this combinations…