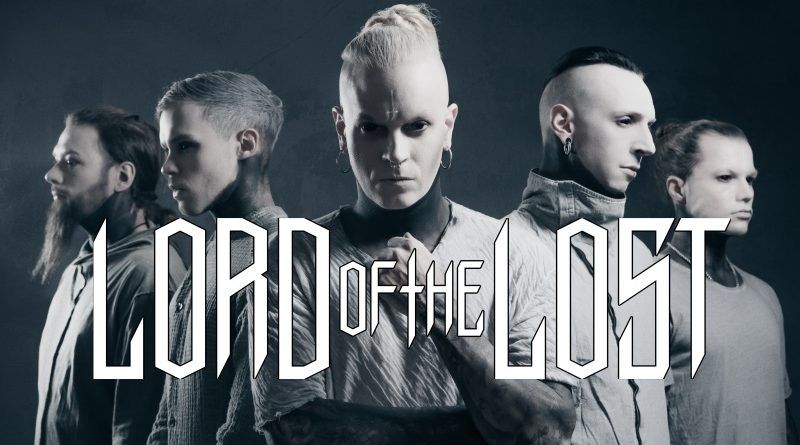 Lord Of The Lost is currently one of the top bands in the gothic metal scene and the expectations for the new album, “Judas” is huge and it’s our belief that it will not be a disapppointment. It wasn’t for us – you can read our review here. To get a more clearer picture of the current phase the band is living, World Of Metal got to talk with Chris Harms, frontman and visionaire of the phenomenal Lord Of The Lost. – by Rosa Soares / Photo by Jan Season

I would like to start this interview, thanking you for your time, and talking exactly about time, qith the cancellation of concerts and tours this past year, music was one of the most affected sectors. For Lord of the Lost, was this time “Lost” or were you “Lords” despite the difficulties?

Of course it’s very hard when 100% of all live plans are cancelled. Not only morally but also financially. For us and especially for our crew. Because we as a band still had the greatest fans in the world that bought our merch! On the other hand, the plus time we received due to the crisis  were very welcomed. Without this time we would have never produced JUDAs as a double album. But we thought “hey, we have much more time than we thought, so let’s make this one as big as humanly possible”.

From 2010 to the present, you have released seven studio albums. This reveals a great creative capacity, but also a very well-defined organization and structure, because for sure you’ll often be composing for the next album, still on promotion / tour of the previous one. Do you want to tell us a little about this rhythm that some bands usually complaint?

Our secret, my secret, consists of two things. First: I am a teamplayer. I am not doing this on my own. At Chameleon Studio we produce like 20 albums per year, but we are a big, big team. Also for LOTL, it’s not only me, or me and the rest of the band. We are a big crew and we are working hard, hand in hand. No one is less important here. Second: I am able to do good time management, and also I can work fast and efficient. That’s it.

The image of Lord of the Lost is something very unique. The entire visual production is based on the bodily use of each of the band’s elements as a means of communicating the intrinsic message of each album. You are the screen and the characters in your own setting, whether it’s live concerts or video clips. Who is the mentor of this form of expression and where are you inspired to create the characters you create?

All creative ideas and decision are our very own. And kudos to Napalm Records as they trust us 100%. We are 100% free in whatever we do and they did not even hear one single tone of the new album until it was finished. As far as creativity goes, creativity is mainly based on ideas. Ideas come. I don’t know from where. We do not have THIS ONE source of inspiration. I am sure that we get inspired but literally everything that surrounds us, at all times, mostly unconsciously.

Chris, your voice is your musical instrument and with it you can get registers that range from the seductive, enveloping and almost confidential, to the sharp, cutting and cold. How do you care for your voice?

I don’t. Because luckily I don’t have to take care about it. On the other hand I am not doing anything destructive anyway, in general. I don’t drink, I don’t smoke, I don’t do drugs, I don’t party, I eat healthy and mostly vegan and vegetarian and I work out to stay fit… So, maybe that’s also a helper.

“Judas” is made up of two albums, “Damnation” and “Salvation”, with “Damnation” taking on a heavier, darker side. How was “Judas” born? Is it the musical interpretation of the apostle’s role in Jesus’ life or is it a metaphor for something else?

The main inspiration hails from the character of Judas Iscariot himself. One of the most misunderstood and one-sidedly seen characters in religious history. But: don’t judge a book by it’s cover! If you look further, think a bit, and start to re-interpret what might have happened, the part that Judas played here becomes something else. If you carry it to extremes Judas becomes the actual saviour. Without Judas, no crucifixion, no „saviour“, no cross as a symbol for Christianity, not even Christianity itself, no churches, nothing like that. This area of tension between being a victim, a scapegoat, a traitor, a saviour, a sinner, a saint? The keyword here is the so called “salvific treason”. And what was the intention here? God? Did God go to Judas to tell him to cause this chain reacion? Was it Judas’ idea a the one pure friendly turn towards Jesus Christ? Did Jesus ask him?Did they switch places and Judas died on the cross? All these things are common interpretations. There are way more though. If you believe in all of that, “fact” is, that Judas went to hell for his deed, even if this was not treason without reason but absolute martyrdom! And Jesus went to heaven. Unbelievably interesting. The album JUDAS is not telling just one story though, that’d be super boring. It’s more about these different thoughts and emotions on Judas and how his character is being reflected in each single one of us. It’s neither an album against religion, nor is it a religious record, which would be weird for agnostics like us anyway. We divided the album into two parts because of the medium “CD”. That’S basically it. To give this some kind of sense, we put the songs that felt a litle darker on “Damnation” and the ones that were a little more “80’s” we put on “Salvation”. Plus that way we had the chance to create two arcs of suspense with a short “I need to pee”-break in the middle. Like in a long Director’s Cut edition of a blockbuster movie.

The duality between good and evil, between the purity professed by religion and the “sinful” temptation of humanity, black and white, is something recurrent in your albums (I’m remembering “Antagony”, also a concept album). Is this dichotomy between sacred and profane something intrinsic to the individuality of Lord of the Lost or just musically explored concepts?

I think there’s nothing individual about us by using the concept of good and evil and the field of tension in between. Every Disney movie, Star Wars, Lord Of The Rings, they all follow the same theme. Also the bible, Heaven and Hell, there you go… We may have an individual way of expressing it or putting it into our art, but who hasn’t? We didn’t re-invent the wheel. But we love to roll on these wheels, a lot.

Tell us more about the production of this album, did you face difficulties due to the pandemiac? What were the main challenges?

The band plus our live and studio crew, plus some friends from other bands wanted to go to Finland, in June 2020, to a studio in a wooden house in the very north, where the sun shines all night. But covid forced us to stay here, so we did this songwriting camp at Chameleon Studios in Hamburg. For one entire week of creation. With some few exceptions we wrote all 24 songs there, at least musically, and some also lyrically. The rest of the lyrics where done the following weeks after the camp, piece by piece.

When bands postpone releases or bet on EPs or live albums, to release a double album is incredibly courageous. Did you had any doubts about this stragegy?

No. We don’t understand how bands use the pandemic to pussy out on creation when they have ALL the time in the world after everything gets cancelled. And this was not a strategy. It was our urgent need to do this!

How do you describe your evolution, from “Fears” to “Judas”?

I don’t. All others do this for me, music press, the industry. I can only say that everything we did felt right and 100% ideal at the time when we did it. That’s the only way to be true. And change is our only constant.

And after “Judas”… what can we expect?

To finish, is there any plans to set “Judas” on a stage, throughout Europe or is it too soon to think about that, due to the pandemic

All plans have been cancelled our postponed thus far, for understandable reasons. So yes, we do have plans, big plans, like the European Tour with Iron Maiden. But I’m trying to hold on to the ball and not to get too excited too early. You never know the dynamics of this situation.