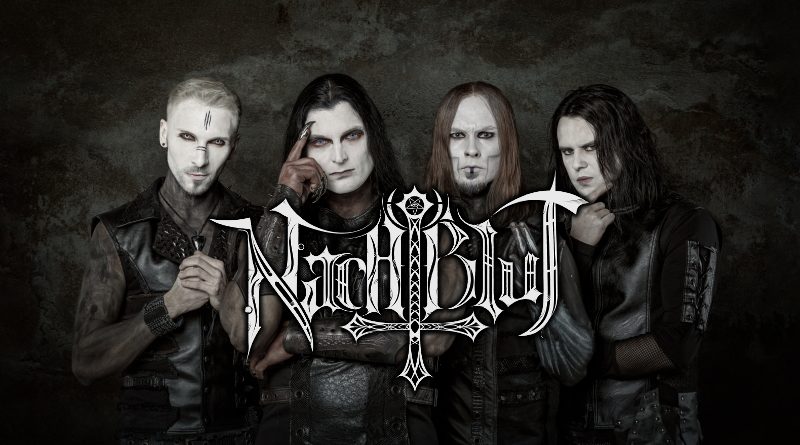 It seems that now is not the best of times to release an album but you can’t stop rocking, not even in the face of a pandemic. Nachtblut proves that when they’re about to release their sixth album of their fifteen year career. “Vanitas” is an example of good german dark metal, and one of their best. Of course that we had no choice but to talk with Nachtblut. Skol (drums) was kind enough to receive us. – Fernando Ferreira

Hello Skoll and welcome to our World Of Metal. You and Nachtblut are back with a great album, “Vanitas”. How does it feel to release this album when we are still going under all this pandemic stuff?

Hi, thanks for having me. Feels good! I’m really happy with the result and looking forward to unleashing Vanitas to everyone out there. Luckily the recording were and the release so far isn’t influenced by the pandemic. Of course, taking pictures and shooting videos, became a bit more complex, but we handled it pretty well. The only bummer is everything regarding touring and shows.

What was your objective, as a band for this new album?

To make a cool, enjoyable and inspiring record. The songwriting started shortly after our Apostasie-Tour and I think the vibe of Apostasie, being not a conceptual record, had an influence on “Vanitas”. Anyway when all the songs and lyrics were written, we realized that they have things in common, which lead to the Vanitas theme. As on all of our records, the lyrics are very important, and we want people to think about those issues and deliberating their surrounding.

This album feels as if is the most diverse and dynamic from your career. Do you agree?

I would agree on this. When we did our preview album “Apostasie” it felt good to have this variety of songs with all the facets. We wanted to continue this and with Vanitas I think we succeeded to offer the same variety, many facets, but still making the songs sound more homogeneous than on Apostasie.

Although you’re still labeled as an melodic black metal outfit, you’ve got so much elements that it’s hard to pinpoint a specific genre. Which give you more freedom. So you indeed feel that freedom when writing or there some ideas that you, as a band, feel that “maybe that’s reaching too far”?

Maybe for a fraction of a second we might think “can we do this?”, but usually the answer is “yes, we can!” In my point of view, the diversity and dynamic is a result of no limitation due to some labels like “Melodic Black Metal” or “Gothic Metal”. I’m not a fan of those labels, but I acknowledge that some people need them to sort things in life, so they do with music too. It’s a sad, if a musician think that he can’t use for example a certain electronic sound, because electronic sounds are frowned upon by the genre they are put in. I’m glad we are not like this and free to do what we like to do.

As usual, you have provocative lyrics that many won’t notice because they’re written in german. How big are the lyrics importance on your song writing?

Lyrics are very important to us. We appreciate that people deal with the themes in our lyrics. It’s nice when people come up and tell you that the lyrics touched them or made them think about that issue. I don’t think it’s a big problem that our lyrics are in German. Nowadays there are a lot of translators like Google or Deepl available or someone translated the lyrics to English. Of course, maybe you’re missing some finesse, but it usually works to get our point.

How was the songwriting and recording sessions affect by Covid-19?

We were lucky on this – the songwriting and recording happened before the whole Covid-19/Pandemic thing started to have an influence on everyone.

These times are very difficult for the music business, did you reflected in releasing the album later, because there’s no certainty when live gigs will be back, and how they will be back?

We thought about it, because we had to postpone our tour. But we found new dates for our shows, which allows us to keep the original release date and still feels like the album and tour are connected. I know that some bands trying new concepts, which are fitting with the hygienic restrictions, but it always has been part of our shows to interact with the audience, with a lot of energy and movement on and in front of the stage. So go big or go home – we hope that will be possible next year again.

In that sense, what are you imediate plans to promote Vanitas?

We do the classic promotion – interviews, features, radio, video and of course social media. Having a look into 2021 and hoping everything will come back to normal, there will be a lot of touring.