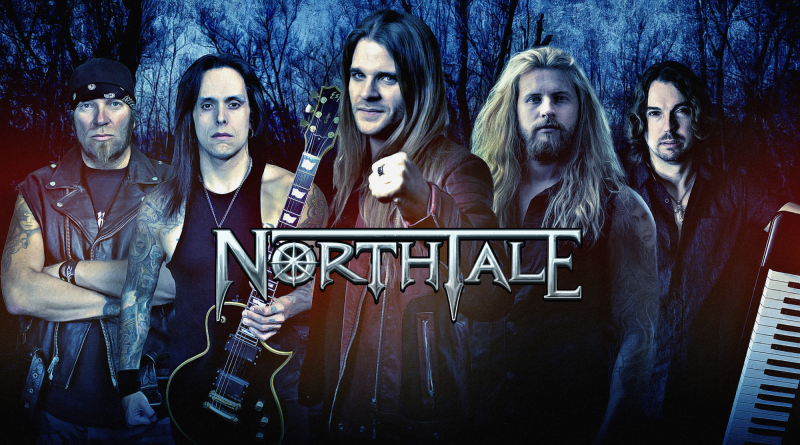 We were took by surprise by Northtale, a new force in power metal created by Bill Hudson (guitars and known by participating on I Am Morbid live gigs and being a member of Circle II Circle), Christian Eriksson (vocals and ex-member from Twilight Force) and Patrick Johansson (drummer and known for being part of Clockwork Revolution). After appreciating the album – you can read the review here –  Bill and Christian agreed to our request for telling our World Of Metal all about Northtale and Bill even talked to us in portuguese! – By Fernando Ferreira / Photo by Marcelo Costa

Hello guys and welcome to our World Of Metal. Northtale is what we can call a superband but the term became so used that sometimes one might feel that is just another one-time thing. I don’t know why but it feels that you guys are in for real and that Northtale is and will be your priority. We can see Northtale as a band and not a project, right?

Christian – First of all, we’ve never called ourselves a “superband” we’re just 5 guys who happens to have the same taste in music. Northtale is 100% a band and if we get our will, you’ll be seeing a lot of us in the future.

Bill – I feel that it’s very important to make that clear, too. These days, with social media, literally anyone can start a “supergroup” with whatever musicians they’d like. Even though we do not in any way shape or form see ourselves as a supergroup, the fact that we get asked that all the time is a testament to how important it is to have the right people in your band.

Let’s go back in time, to 2017. How did the vision of Northtale is started to form?

Christian – The vision of NorthTale has always been to write and record the music we love and  can be proud of.

Bill – The vision really started from an instrumental solo album I had been planning for years. I wanted to have a couple of vocal songs, and I wanted Christian to sing those songs! When we first made contact, he was rather busy with his old band, and quite honestly so was I. He happened to become available a few months later, and we got together, recorded those songs I had and wrote another batch! The rest is history.

Before we could hear any music, the first contact with “Welcome To Paradise” was with its cover, an excellent work by Felipe Machado. How did you thought of him to do the work?

Christian – Due to his previous works we had a great feeling that he alongside with our bass player Mikael could achieve what we were looking for.

Bill – It’s important to highlight that Felipe found us! Which made us all extremely happy, as we were looking for an artist in the down low. Things happen serendipitously like that for us (Laughs)!

You’ve said that the music, lyrics and overall message tries to empower the listener for their own lives. Do you feel that nowadays we are in a society that tries to control each one of us and control our dreams, not letting us fly, saying “you can’t do this” or “you can’t do that”?

Christian – Hasn’t it always been like that?!  We want to spread the vibe that everything is possible as long as you believe in yourself and what you do.

Let’s talk about the music itself. The sound is really powerful and it’s a nod to the power metal that was really popular years ago. Being composed as so many talented and different musicians, what would you say that are the influences that shine through on “Welcome To Paradise”?

Christian – For me I would say that bands like Helloween, Gamma Ray and Judas Priest are heavy influences.

Bill – Tolkki-era Stratovarius and Matos-era Angra were big ones for me as well. Yngwie Malmsteen, of course… and Iron Maiden, which I always say is the basis of it all!

How was to record this album? Was there any pressure for being a new chapter in your professional lives?

Christian – At that time I didn’t really think so much about anything else than getting the recordings done, but now with only one week left before the release I’m starting to get nervous.

Bill – To be honest, I knew how important this would be from the very first note. It just seemed so far away, it was almost unreal. Now, as Christian said, it’s right down the corner and the nerves start taking over. We can’t wait to see this baby out!

How did Nuclear Blast Records reached to you? Was first or after you’ve recorded the album?

Christian – We had recorded what was to become our EP and I knew Markus  from before So I presented it to him and Bill knew Jaap from before and did the same thing. After that everything went quite quickly and since NB wanted a full length album we started to get things together.

Bill – We got offered a few small distribution deals first. Then, a slightly bigger label from Greece got ahold of us, and we started thinking “maybe this label thing can work if we go after a bigger label?”. At first we wanted to self release an EP, but that EP turned into a real album. I’d say the contact happened IN THE MIDDLE of the recording of the full length.

What are the expectations you guys have for the near future? What do you expect to achieve?

Christian – I don’t except anything.. I only hope people are going to like the album and that we can take NT out on the road as soon as possible.

Both of you already came to Portugal. You were the last, Bill, with I Am Morbid in Lisbon, but Christian also visited Porto, when you were in Twilight Force. Can we expect to see you guys again, this time on the same stage?

Christian – I’d love to come back, the crowd of Porto really blew me away. Plus it’s very beautiful so for my retirement plan (far from now) I have a good eye on Portugal.