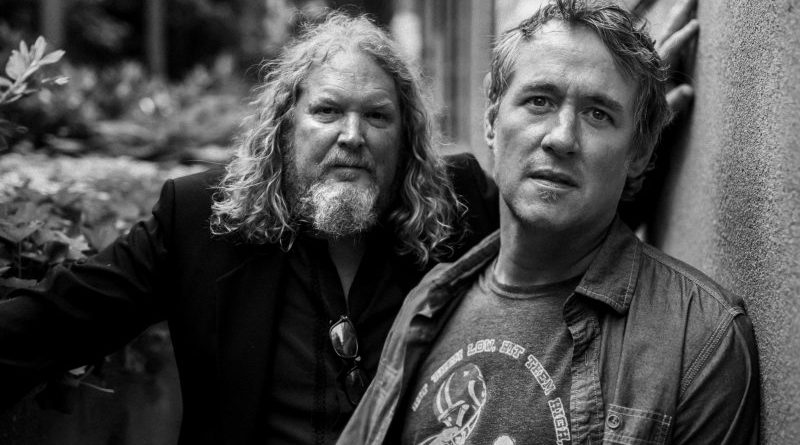 Is no secret that we all love prog, so the chance to talk with Brett William Kull (producer, audio engineer, and member of Echolyn, Grey Eye Glances and Francis Dunnery’s New Progressives) and J.D. Beck (Beck-Fields, The Scenic Route, author & playwright) about their new project together, Rise Twain seemed too good to waste. World Of Metal asked and the gentlemen answered most kindly, as you can confirm below. – By Fernando Ferreira

Hello guys  and welcome to our World Of Metal. I’ll start by asking when did you both felt that Rise Twain was going to be created? You’ve knew each other before but when was that moment that you both decided to create Rise Twain?

JD – Thanks for having us! We started to send ideas via phone or email… little music snippets, a part or two parts, and started to assemble these works. Once one song was created and Brett put his musical engineering master touches on them it was clear it was time to make another. We felt making an EP was a great idea… but then we over-shot that and had to decide that stopping at ten was a better idea. It wasn’t until near the end of composing these tunes that the name Rise Twain came about and the notion that this special music needed to get out there.
Brett – I was working on my 3rd solo album, Open skies Exploding, and had JD play on two of the tracks (backing vocals as well). It was then that we decided to jump into a collaborative project – 2017.

You have both a huge a brilliant career on your own. For those who have accompanied your work for the last years, what is that Rise Twain has to offer, different all that you’ve done?

Brett – This project gives me yet another chance to work with a very talented person (JD), learn form the experience, and throw it into the social fabric.

JD – This duo is great in its own way. Brett and I really bring together ingredients of our musical abilities and created something we feel is unique but accessible to most listeners. The music we make together stands alone, aside from any other collaborative effort I have been in. For example, I have been in a duo called Beck-Fields, an experimental electro/acoustic project for 6 years plus. The music William Fields and I make is different due to who and what Bill is in the music realm. Brett and I work very well in this regard – like peanut butter and jelly. I feel his strengths and my strengths make this music what it is – a great pairing of musical minds.

Your self-titled album is astonshingly beautiful and has a lot of different layers and depths. Did you had any prior objective when start composing? And how that process worked? You exchanged ideas between yourselves?

Brett – Thank you for the compliment. We did not have any preconceived plans in regard to styles or song content as we embarked on the songwriting. We just wanted to write some song based music that we both felt excited about – using both of our vocal sensibilities. The process of writing was very unencumbered. One of us would start with an idea, play it for the other, then we’d collaborate on finalizing it. It was a relatively fast process.

JD – Thank you. Lovely to hear. Really! No aim. It was not pressured to be one thing or the other. We always made very layered music together within our history together. It is something that comes naturally. We are left with something you can listen to again and again that finds different little corridors of sound or events you may have not noticed before. This shared belief and use of these nuances is one of the things that made us communicate from the beginning. As stated earlier, this project began with us sending ideas, simply and without onerous feelings; we freely made the music as we would want to hear it. We still send ideas back and forth. In fact, there is a nice packed file somewhere filled with the next album potentials. I can’t wait to dabble in that cookie jar!

How about the lyrics, they came up along the music?

JD – All different ways. We are both poets and wordsmiths in our own rites. Speaking from my end, sometimes the music evoked a certain feeling to which I would write. Sometimes I would bring lyrics or prose to the piano and I would muse from there. And sometimes the song would be done, and we would embellish the music with words on the fly. It’s key for me not to be restrained in this process. Therefore, it happens as it should.

Brett – The lyrics sometimes came into being in the moment, e.g., The Range, Golden, Falling Skies. Sometimes they were crafted to fit the song. One of us would generally take the lead on writing the lyrics.

On the press release, the name of Jeff Buckley cames up a lot and listening to “Rise Twain”, it makes perfect sense. Can we say that it was an influence, or can we say that there are other influences musically speaking?

Brett – That’s a nice comparison. I’ve always been a fan fo Jeff’s music. With that said we were not overtly thinking of his music when writing this album. Our album is more inspired by our life experiences at the time of its writing. For me, I was inspired by some poetry I was reading and by events happening in my life.

JD – In my rock life… rock life… can I say that? In this trip we call music, I have been pinned to Mr. Buckley. I was a singer and songwriter long before the premier of Grace on MTV – when I first caught a glimpse of him and many a friend and fan (of my projects at that point) noted we had similar expressive qualities. Honestly, I am influenced by so many artists. Almost every song I hear, whether good or not, somehow influences me. I am influenced by the sounds of the mechanized world and the sounds of nature… even the pitch of silence. There is a sound there too, no doubt, resonating from my body. It is an honor, however, to be given this comparison. I always thought it was a voice register, or similar shaped resonator or vocal cords, or maybe the use of a similar vibrato. Perhaps we are kindred? There never was any emulation, but have always respected and loved Jeff’s work. Rest his soul.

Can we hope that Rise Twain will reach the stages? Being a duo and considering the music and the arrangements, it’s only possible with a backup band behind but is this an option to consider?

Brett – JD and I are putting a band of backing musicians together to play live. We’d both look forward to it this fall and beyond. The cool thing is that we can also just play as a duo. The songs work in that form as well – since they were written that way.

JD – We are definitely going to hit that road. We are looking forward to it. We have a great set of brothers that will do it right!

“Rise Twain” was released by InsideOut Music, the best home for progressive music. How did you signed with them?

JD – Brett… this one’s for you. I will say what an immense honor it is to be taken in and treated so nicely. This label houses professionals who show their love for the world of music and their jobs. It has been a great pleasure thus far.

Brett –  I had sent Thomas Waber the finished album back in January 2019. He called me, we chatted, and here we are. I feel fortunate to have our album be part of his label. It’s a great opportunity.

This songs are perfect to listen in vinyl, that old timeless feel of progressive rock. Do you think that all this vinyl revival is bringing back more focus to the music opposite to the expendable spirit that is predominant nowadays, where it feels that nobody has patience to listen a full album in a row?

Brett – I don’t know. I think vinyl represents a few things in the social scene. Nostalgia is one, the hip factor is another, the ritual of listening to an album is another, and the perception that vinyl sounds better yet another. Or maybe people dig the large visual aspect of the packaging? I know I do . All of these reasons are probably the main cause we see a bump in vinyl sales lately. I dig having my music on vinyl because I grew up listening to records as a kid. It’s a cool “bucket list” opportunity to say I have a few of my musical creations on a format like this. I’m glad people find whatever reason they wish to connect with enjoyment, contentment, joy, sadness, etc., though music.

JD –  I hope so. Truly. I look forward to hearing this on vinyl. Bill Schwartz, our artistic director for the album, made a beautiful cover and insert. I can say we put heavy consideration into the song order and the arc shape of this work. I am a person who listens to someone’s album all the way through. Making albums doesn’t stop with writing the songs, as you know. I love it when I hear an album put together so well that you can’t help but listen again, in order. I prefer it that way. It shows the artist had something bigger to say outside the ephemerality of the single song; that they are tapped into something higher in their offering to the world. This album has that. It has re-occurring themes and material and it has a form that moves and leaves one with a sentiment from the whole not the part.

What can we expect for the future of Rise Twain?

JD – More music. I can’t wait to see what comes next – to see what the evolution of our expression and sentiments will be. I am sure it’ll be something like nothing else. Meanwhile we’ll sing to the world and await patiently by that proverbial cookie jar.

Brett – More music and live performances! Thanks so much for your time and interest! Glad to talk with you.