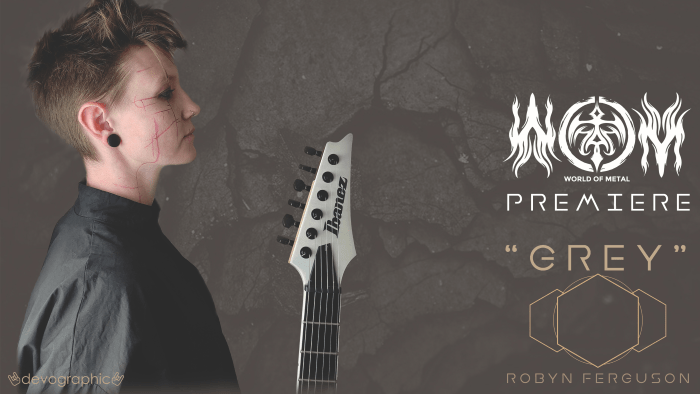 Robyn Ferguson is back with a new EP,”Triptych” (that will be unleashed tomorrow) and today, in a World of Metal exclusive, we’re goint to present the video for “Grey” as we also present an interview with Robyn about the new EP, last year’s recap and also plans for the future. Check it ou below:

Hello Robyn and welcome to World Of Metal. I would like to take this opportunity to present you to our readers. So, let’s start! I do not want to ask the obvious “who is Robyn Ferguson” but, where did your musical path start, and what made you fall in love with your guitar?

Hello and thank you so very much! Greetings all the way from South Africa! Guitar is such a wonderful instrument and music is such a vital part of my life. I picked up a guitar around the age of 12 after being inspired by the happiness I saw in another musician. He was performing his heart out and I wanted to feel that same happiness, so I grabbed a guitar and have never put it down again. It speaks when I can’t.

What are your main influences and guitar player heroes?

I’m influenced by the world around me, by nature, form and time specifically but that reach is far greater than just music or one specific thing. I grab influence and bits of inspiration from all kinds of artist but to name a few on a LONG list: Devin Townsend, Daniel Tompkins.

You were part of two bands, “Adorned In Ash” and “Sistas Of Metal”, but you decided to go solo. Was this something you were thinking for doing for a long time?

I love performing as part of a band and have always been in bands, but from about 2017/18 I started diving further into music and started doing quite a bit of session work. The journey from there sparked inspiration and led me to write loads of material. Much of it landed up with Adorned in Ash on our album “Apocalyptic Violence” and on a few other projects, but by the end of the year I was left with quite a bit of stuff which I loved and that didn’t ‘fit’ in anywhere. BUT, that I wasn’t going to toss away either. So, I decided to push all my efforts into creating a grand and ever expanding body of solo work.

Did you feel that going solo is how you can best express yourself fully, or are there many sides of your creativity (and hence your solo work is just one of them)?

I guess with my solo stuff, it’s MY solo stuff, so that does give me the freedom to do and write whatever I want … and I quite like that aspect but my solo work is indeed just one side of many others. I find expression through being in bands, and solo stuff, and art, and…. everything I love and enjoy. It’s multifaceted.

Last year you released both “Falling Forward” and “Harbinger”, how did you feel it was received, especially in midst of a global pandemic? Did it affected your plans for them?

It was crazy! I had no idea what to expect or what would happen but both albums have been incredibly well received! It’s been a year full of change and adaptation and evolution and I’m so thankful for all the love and support I’ve been shown with both releases! It’s allowed me to steamroll forward and make art.

You just released your third EP “Triptych”. Why the option of EPs, as opposed to a full length? In this time with no live shows, is it more important to keep your name out there and keep fans connect *as well as attract new ones)?

I love challenging myself. I want to do it purely because I believe I can and I’m going to push to make it happen. Things change – who knows, maybe there will be 5 albums, or 2 or 10 (laughs). Regardless of the number, one thing is certain, as long as I am able, I will create, I will perform!

Tell us about your new EP “Triptych”. It has collaborations with Adam Alvarado and Mark Pyjama. How was it to work with them?

Yes! What an honour it has been to work with these two fantastic gentlemen! Adam is one insanely talented guitarist based and I’ve got great amounts of respect for his guitar skills and playing techniques. So guitarist to guitarist, I’m a BIG fan! Mark Pyjama is a fellow South African who really knows his stuff when it comes to orchestral composition, and it’s incorporation in progressive styled music. I’ve always enjoyed symphonic metal and symphonic music, so having his amazing skills feature on this EP is so great. Working with both of them has been incredible, and I’ve learnt a great deal from each. Triptych is seriously going to blow people away.

Do you have plans for when your next EP will be released, and do you have songs written and recorded for them?

Music is continuously being written, and I’m always thinking of the next piece and how it all fits together. Much has been written and recorded, and much still needs to be written and recorded. I have something up my sleeve which will be announced in the coming months … so stay tuned.

What is your greatest wish for your career in 2021?