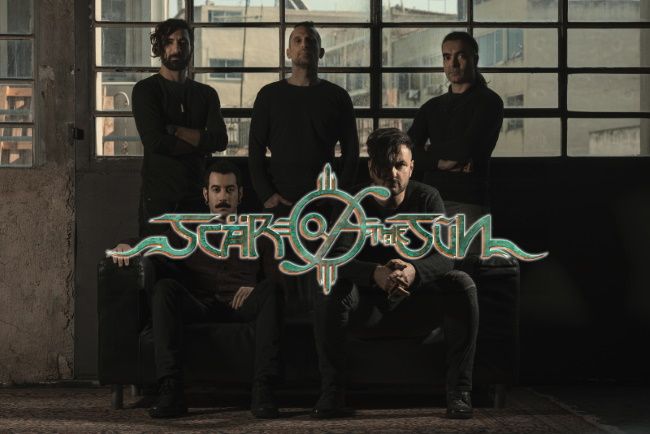 For those who like their metal melodic, heavy and diverse, greek masters Scar Of The Sun is a band that you have to know. They’re back with “Inertia”, their third opus and probably their best one. World Of Metal talked with Terry Nikas, Scar Of The Sun’s frontman about “Inertia” and you can check it out below how it went down. by Fernando Ferreira / Photo by Cristina Alossi

Hello Terry and welcome to our World Of Metal. “Inertia” is your newest album soon to be released, what’s your expectations for its reception?

Hello and thank you very much! Well, this is our third album overall and our first release with Napalm Records, so we really hope that people will get to check out the album first of all. I always believed that the music we compose can make many people get related to it, because no matter what “difficult” elements we incorporate, what always prevails is catchy songs that can stick to your mind. As a result, we see this release as a great chance to widen our fan base, since Napalm Records is supporting us very much and they have a broad network that ensures more exposure for us than ever before.

There was a longer than expected silence between the new album and your second one. You prefer to take your time between albums or did the pandemic afected the plans to release “Inertia”?

The reason we delayed is a result of many factors really. The main reason though was that we wanted to get a better deal and that takes time. We prefered to wait a bit more and take our chances because we believed “Inertia” is an album that should receive a proper promotional campain, better than what we had so far. After the deal with Napalm Records –that took a few months to finalize- pandemic stroke, so we delayed a bit more because all bands want to release their albums closer to the time that touring will resume. So no, we don’t prefer to take our time and I can ensure you that this will not be happening from now on.

Talking about the pandemic and besides the release, how deep did it affect the writing and recordings of the new album?

It actually didn’t affect it at all. The album was completed before the pandemic and the only thing that happened was that it was mixed for a second time, because there were a few things I didn’t like on the first mix. We are all affected though by the pademic, so I am pretty sure there will be some related songs on our next album, since I am writting for all the things that affect our lives.

One thing that I love about “Inertia” and your overall sound is that you’re not a easy band to label, which nowadays it’s refreshing to hear. How would you categorize your style of sound?

Since the beginning, the idea was to have a band that will incorporate many different elements in our music. We left many doors open so it would be natural to follow different paths and be multidimensional. We call it Modern Metal because this is what it is, but we know that this does not define the sound, it can be anything really. Our new album is a mix of Swedish Death Metal, Metalcore and Djent. Aesthetically we feel close to bands like In Flames, but we don’t play the same music. The idea is very close though. I cannot put just one tag on our band, which I find very nice and interesting. First of all because we are open to changes, secondly because this makes things interesting for us and thirdly because if we change in the future it would be normal and no one could point the finger at us. So we stick to “Modern Metal” and we leave it up to every single person to tell his/her opinion about what we play. We are absolutely cool with that!

The sound is really powerful, can you tells us more about the production of “Inertia”?

First of all, thank you very much! This is a personal compliment, because this is my every day job and I have recorded and mixed this album. I am the owner of Zero Gravity Studios in Athens, Greece, which is a very important factor for the band. We don’t have to pay anything for rehearsals, recordings ang mixing. It is easy to communicate with all the members regarding the small changes and corrections this way also, so we had all the luxury if you want, to record without checking out the clock. As you can imagine, we have the time to work on the album till we are all happy and we don’t have to compromize anything. I am happy that you found the sound powerful, we did our best to reach this result. The studio is a top notch professional studio, so we had the chance to use top quality equipment and take our time to experiment with everything we had in our hands.

It must be frustrating to have a great new album like “Inertia” and not being able to promote it. There’s some kind of plans for that, now that things seems to change?

Absolutely! We are just doing interviews and push the singles/vídeos so far and it’s the only thing we can do for now. We are thinking to do an on line show at some point, but we have to check out the timing, because our guitarist Alexi will have his first kid in June and the whole band will plan things around that of course. Other than that, we are in discussions with our booking agent and our label in order to check out tour packages. Touring is extremely important for us and we are so looking forward for the pandemic to end and get back to normal. Like any band really I guess…

I’ve asked about the time between albums and can’t stop thinking about the declarations from the Spotify’s CEO that says that a band/artist has to release something more often – this as a response to the complaints that the fee per stream is low. Considering Scar Of The Sun’s reality, what’s your opinion before this declarations?

It is true that the percentage a band gets from Spotify plays is almost nothing. Our previous album passed the 1.4 million streams on Spotify and we got nothing at all. Zero! On the other hand, our band’s reality is not gonna be the one we had so far. We plan to finish composing our next album by the end of the year, enter the studio in 2022 and have it ready in 2022. I saw the statements he did but I cannot tell you if we would release an album every year how things would change. The absolute truth is though that the percentage is low and that people like him are getting rich on other people’s backs. Typical unfortunately…

The impact of the pandemic on the music industry it’s enormous but do you think there will be some profound changes?

I don’t know how many bands will survive this first of all. I know many musicians that changed work and if they reach some stability there, I am not sure if they will abandon that anymore to get back to the uncertainty of the music industry. I hope that things will get back to normal because I am not also sure what other changes we can take. I mean illegal downloading and streaming destroyed the music industry big time. Obviously the multinational labels had their share in that, for example Sony Records created the CD recorder. Which basically allowed people to steal their profits. At the end of the day, the one that will lose the most is the musician, which is always on the bottom of the pyramid. During the last years, sales started comming back on a certain level – it will never be the same unfortunately – especially the vinyl comeback is awesome! I don’t think that the industry can take many more changes. So I just hope things will get back to normal really.