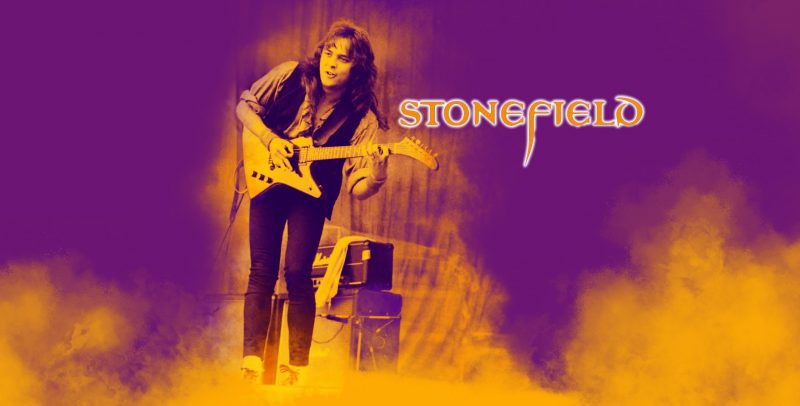 Stonefield is a fine example of how you should never say never. Stonefield has a story like many other bands. They start full hope and dreams, release good albums and then, suddenly, all goes wrong. Manuel Rodriguez, founding member, was never quite satisfied how things turned out for their last album, so almost thirty years later, he decided to take on the best songs from the “Mystic Stories I – The Eyes Of The Dawn” and “Mystic Stories II – Light Of Lies” and release it as “Mystic Stories”. We got in touch with Manuel, so that he can explaine us all this process and how deep is Stonefield’s resurrection

Hello and welcome to our World Of Metal. I have to start by asking if you ever expected, some years back, to be here talking about Stonefield, so many years passed the end of the band?

Hi and thanks for your interest on Stonefield 2019. I was not expecting that at all. As you know this is an old adventure and I kept moving on my path doing lots of other stuff and styles since the Band broke up in 1992.

“Mystic Stories” gathers the songs you consider best from your two first releases. Was it hard to pick which ones would it be picked?

It wasn`t hard. It was clear to me what Songs would do a very cool album. I choose the Songs having the whole picture in mind. I knew I wanted to start with “Falling Lies”. This song is also the start of our first Album and has a very nice Intro. I knew also that I wanted to end with “The Eyes of the Dawn” which is also the end of our first album and has also a cool little Acoustic Guitar Outro on which I recorded a few new guitar lines for this edition. I picked up the other songs watching things like tempos, keys, different grooves etc. My goal was to make it interesting for the listener and to make it as colorful as possible.

What was that you think tha it was missing on this set of songs originally? We know that you weren’t satisfied with the result of the second album.

Since we had a little Budget there was not enough Money to hire a real Producer. We rented a good Studio and did the recordings with a Sound Ing. All instruments where recorded well except my rhythm guitars. We basically used the wrong Equipment and Microphones for it. To get a good Heavy Guitar Sound you need to know a few things and I just wasn`t aware of all that in those days. I knew how to sound good live but Studio is a complete other animal. On the new Mixes I doubled and add some guitars to make it sound fat. But always without taking away the integrity of the Original Guitars. You can think of it as the way they restouring old oil pictures bringing the original Colors back to life.

After the end of Stonefield, you pursued a career in music as a solo artist and also producer. Looking back, do you regret the things turned out as Stonefield, is there some decision that you wouldn’t have taken?

When you look back there’s always something you would have done different. But generally spoken I’m ok with the way things went. I’m very glad I did this Version which gave me the chance to fix the things that I wasn’t happy with. It was a really cool experience and it brought back hundreds of good memories. I was for 8 years in this Band and the time had come to move on and to experiment new stuff. For me it’s a full circle now and I found my peace with it.

How has been the reaction to these songs, some of them written more that 30 years ago, now being listen to a completely new generation?

The reactions are great so far. I was surprised of the good respond I’m getting from new generations since Heavy Rock sounds a lot different these days. In the end it’s about the Song and I personally think these songs have no Expiry Date.I just got a call from a new Generation Spanish HardRock Band asking me if I would be interested to produce a Song for them.

Althoug prog rock is not as big as it was on the seventies and even eighties, there’s a strong scene underground. Did you followed on what was happenning, after the end of Stonefield?

I’m interested in music as a general art form. I try to have a overall view and go not to specific into styles and genres.  I’m aware that there is a strong underground scene and Friends send me youtube links with a lot of new stuff. There are a lot of very good young players and Bands out there which is a good thing.

Will the new mix on the old stuff can bring the will to assemble a new line-up of the band and make new songs?

We have no plans at the moment to do a new Stonefield Album. I’m just working on my next solo album which will be an instrumental one dedicated to the acoustic guitar. No other instruments and musicians, just acoustic guitars played by me. But I have to admit that I’ve got hooked back a bit to Hard Rock during the work on the new Stonefield MIxes and would not rule it out.

Do you consider the hypothesis of playing live, som special concert?

We also have no plans at the moment for a live reunion. The members of the Band are spread all over Europe and everybody has its life. This means it would require a certain amount of work, logistics and cost to bring this back on stage. With other words there has to be a real demand for it. Nevertheless I never rule things out since life has a lot of twist and turns. At the moment I’m very satisfied with Mystic Stories and happy that it gets received very well by people of all ages. Let’s see what the future holds and if there’s another chapter in the books.