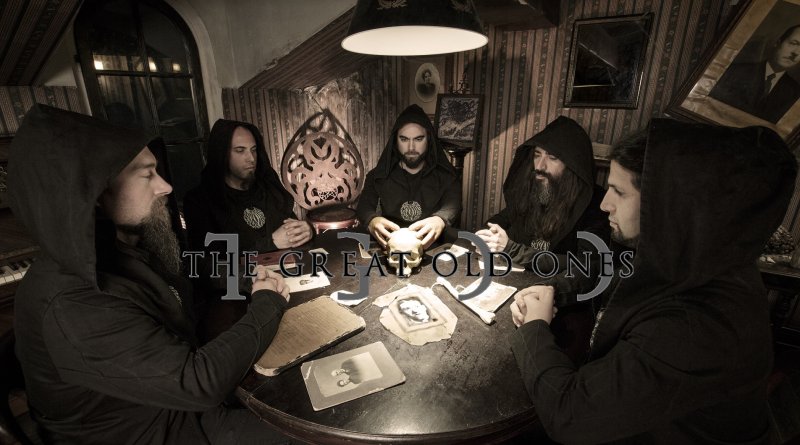 The Great Old Ones are special band. Not only they have an unique take on music as they use a great source as inspiration: H.P. Lovecraft. Being a Lovecraft fan, it’s always a good to interact with fellow fans of his work, more even when they make good and well-thought music as the band does. With this interview we wanted to know more about their new album and possible future plans regarding touring but we also wanted to get an overal view and introduction of the band to you, World Of Metal readers and followers and Benjamin Guerry, guitar and vocals was kind enough to help us out to do so. Here’s what you got. – By Matias Melim / Photos by Joel Queyrel

When and how did The Great Old Ones start?

I begun to write songs for this project in 2009. I didn’t know at all that it was going to be for a band, I only composed for myself. But in 2011, when I had almost all the material for an album, I decided to look for musicians. And then everything went very fast!

Taking into account that you are a band that exclusively makes music based on Lovecraftian themes, would you say that initially The Great Old Ones was a group of fans of the writer that wanted to dedicate music to the eldritch or did you want to start a black metal band and chose Lovecraftian themes to differentiate yourselves from other bands? I guess I could ask more shortly: what came first Lovecraft or black metal?

I was of course a very Lovecraft fan. But it’s black metal that came first. I had listened to it for a very long time but oddly, I had never tried to make black metal music. As part of the composition work, I found some feelings that I felt when I read stories from Lovecraft. And everything has become obvious: Lovecraft was going to be at the center of this project.

Also, what would you consider more important of those two? Do you prefer to be recognized as a Lovecraftian band or as black metal band?

The two are closely related, the ideal term being, for us, Lovecraftian black metal.

What bands influenced then The Great Old Ones?

I can’t speak for everyone, but for my part, I can say Emperor, Enslaved, Gorgoroth, Opeth, Pink Floyd, Cult of Luna, movie scores and classical music.

Moving on to your latest release, your 4th album – “Cosmicism”, that will be released on the 25th of October; what would you say is it’s deeper meaning and how was it idealized?

Through fiction, Lovecraft expresses a very interesting and intriguing thought. The human would be an insignificant thing in the cosmos, and would not be aware of the issues involved. The human brain would not be made to understand all that, and the slightest representation of these issues can drive him crazy. This is something that seems quite realistic, we know so little. In our album, each song is based on a Lovecraftian entity, and it tells the story of the protagonist who meets her. We wanted to make a varied album, and that fits perfectly with the concept.

What influences and sources we’re used for this new album? I noticed the use of inspiration by other authors, mainly regarding deities less mentioned by Lovecraft (Hastur and Shub-Niggurath, for example).

Everything is mainly based on the writings of Lovecraft of course. But for some of its entities, there is little description. So for once, we allowed ourselves to be inspired elsewhere. The most obvious example is in the song “Lost Carcosa”. The piece is mainly based on “The Yellow King” by Robert W. Chambers. But this is not a true infidelity, because Lovecraft himself was directly inspired by Chambers for the Hastur entity.

One major change from your last album, “EOD: A Tale of Dark Legacy”, is that “Cosmicism” rather than assuming a continuous story it develops as if telling several disconnected short stories. Would you say it’s easier (both in terms of lyrics and in terms of sound) to create an album situated always on the same subject or rather creating it with, supposed, disconnected backgrounds?

It’s a different work, but just as interesting. Writing a concept album based on a single story could seem simpler because you could say that it is enough to follow the course of events. But it also requires composing pieces on feelings already expressed and written. On the other hand, writing an album on different stories makes it necessary to bring a real beginning and end to each song. But this offers the possibility of a larger variety. These are really two different things!

At the moment there hasn’t been any announcement of any tour for this new adventure of yours. Are there any plans on the near future? Is Portugal on the list of countries you want to visit to present Cosmicism?

We work on different tour projects. A French tour will be announced soon, but our goal is to go everywhere. And we would really like to come to Portugal to present you our new album.

On a not so related department, I’d like to congratulate you guys for the appearance in the French book : “ Cthulhu Metal”, a book that seeks out to demonstrate the influence of Lovecraft in the metal scene. How do you feel about it?

Thanks! It’s really a great recognition to be part of this well-researched, and exciting book. Lovecraft has inspired a lot of bands, and in many different metal styles. There are of course the most famous bands, but also full of more underground references. And personally, I am very proud to have had the opportunity to write the preface.

Do you consider the influence of Lovecraft vast in our style of music?

Yes. And what is interesting is that each band appropriates the universe of Lovecraft to give its vision. All are personal, but it is also the principle of music and Art in general. We can also note that more and more groups make Lovecraft’s writings their main source of inspiration.

Also on the same subject, has anyone of you been ever compelled to write/publish stories in this field? Either fiction or more documentative work?

The band remains our main tool to pay homage to the work of Lovecraft. Personally, I had the opportunity to participate in a reading drawn on texts of the author, and to make the soundtrack with a friend. It was also a very strong experience.

Now generalizing, how do you feel about the way that Lovecraft’s heritage has been entering more and more in many and most diversified types of media (music, tv shows, cinema, videogames…)?

I think it’s a very good thing. Lovecraft has not been successful in his lifetime, and some people have worked hard to make his work known. The fact that today his universe has entered the pop culture is a rightful giving-back. We still miss the great Lovecraftian movie, which will honor him, but I still believe it. Although I am an absolute fan of John Carpenter’s The Thing, which is for me a pure movie with a Lovecraftian vibe.

Finalizing, for future pursuers of anything Lovecraftian: Do you have any advice to the fans, in order to avoid the saturation of Lovecraftian themes in music? Unfortunately, it’s a thing that has been happening in cinema, shows and video games, making music the least saturated field (at least according to many fans online).

The most important is his vision of things, without a copier this or that project. As long as everyone does Art with their own sensitivity, the results will be interesting, or at least personal.

Once again I’d like to thank you for taking the time for this interview! I’ve already pre-ordered both the t-shirt, album and statuette by the way, and wish you guys best of luck with the release of your album! Stay metal and keep driving people insane!

Thank you very much for your questions and for the support. Hope to see you in Portugal