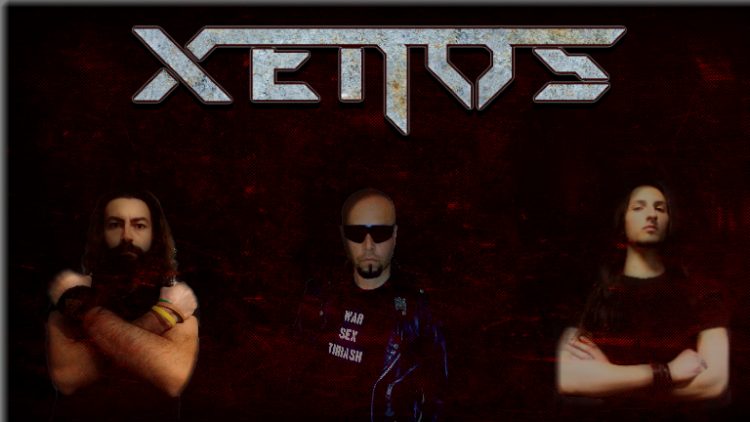 Thrash metal is always a passion of yours, a passion that we insistin sharing with all of you, our World Of Metal Maniacs. This time we insist in showing Xenos, a great italian thrash band, that impressed us with their debut album “Filthgrinder”. We reached out to Ignazio Nicastro (vocalist and bass player) to know more about Xenos, the album, and obvious the present time in Italy, with all these Coronavirus crisis.

Hello Ignazio and welcome to our World Of Metal. Xenos, as far as we know, began in 2019 and now in 2020 you’ve already have your debut album released, the great “Filthgrinder”! Guides through the inception of Xenos and, by the way, why that name? What does it stands for on you concept?

First of all I wish to thank you so much for the awesome words you spent on Filthgrinder. Xenos was born from my need to come back to my musical roots, I felt the urge to come back to compose the music that more than 20 years ago pushed me to be a musician. I am a Thrasher and I grew up with Thrash Metal as the soundtrack of my life. Xenos is a greek word and it means “stranger”, it stands for my way of feeling myself inside a world made of injustice, selfishness, ignorance and hate.

How was the production and recording of “Filthgrinder”? Did it turned out the way you expected?

Well, I can say I’m fully satisfied. I wanted to give to the entire work a dirty and rough sound, very thrashy far form the plastic production of the present.

Nowadays we have several tendencies within the thrash genre. I think we can say that Xenos stand in between the more tendencies and the more traditional feel. Do you agree? Do you had any kind of objective to your approach?

Xenos is a Thrash Metal band that love to be it, not interested in contaminations and other modern things. I think our way to play and compose music is very close to the technical stuff of the nineties maybe more instinctive.

Still about your sound, it’s refreshing your technical approach to thrash on a time and age where everyone tries to bet on more groove?

You know, Eversin is a Groove Metal band, and honestly, I lost interest in playing that stuff years ago. This does not means I m not interested on Eversin music but it’s clear that Xenos is a different band and so it must remain. Thrash Metal at all.

You had some special appearances on “Filthgrinder”, the mighty Jeff “Mantas” Dunn from Venom and Simon Cobb from Anihilated. How did this appeareance came to be?

I asked Jeff to play a solo for “Birth of a Tyrant” because the mood of the entire song reminds me some of his Venom Inc. He soon accepted, it was a honor to have a legend as mantas on our debut album. As for Si Coob, well, he is a friend of mine and I love Anihilated. I think Simon is one of the most talented voice in the Metal scene, the european Tom Araya and I gave my best on the song we sang together.

What is the critical response to your album until now? And the public feedback?

Tons of awesome and amazing reviews beyond our expectections. People are loving Filthgrinder, they are listening a pure Thrash Metal band, honest and real, no fashion or trend.

It’s inevitable to talk on this topic. You’re from Italy, and despite you’ve already told me that you area things aren’t very bad, whole Europe is on prevention, closed borders, people stuck in home. What is the effect that it had on your plans for the band?

Unfortunately the situation is very hard and even though in my are things seem going better the entire Italy and Europe are under the attack of this fucking shitty virus. I hope we will get through very soon or the negative effects will be devastating on everything not only about music. We have gigs confirmed for this summer but, honestly, everything seems so hard now…

Do you think things will never be the same after this?

What can I say… Things will change in the next months, that s sure, but after a storm there will be always the sun. We have to hang in.

Plans for the future, for Xenos, what can we expect from you guys?

I have 9 demo tracks of the next Xenos album ready to work on. Next chapter will be incredible, the more I listen to the demo tracks the more I realize the potential of the record. I will be thousands of time more deflagrating than “Filthgrinder”, more technical, more fast and more aggressive.