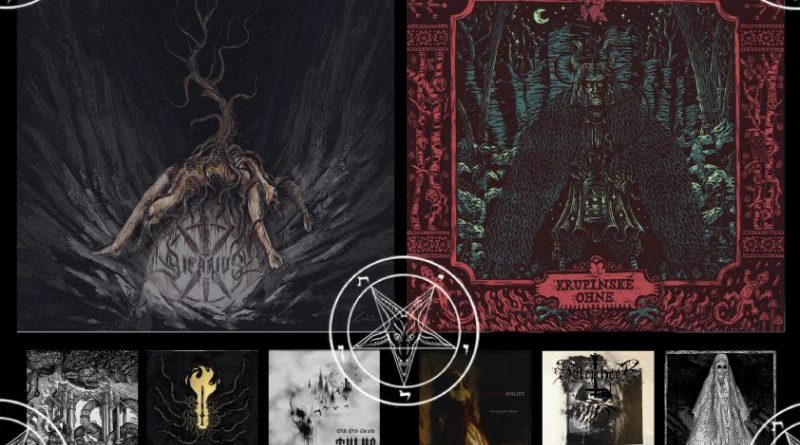 Eastern countries are, indeed, extremely crafted when it comes to Black Metal. Since the late 80s, multiple bands have been giving, to an avid audience, several forms of how Black Metal should sound. From the experimental works of Master’s Hammer, to the dark and frightening approach of Tormentor and the epic side of Black Metal, by Root, the genre has been presented in its numerous facets. Isolation sometimes works in favour of the artist. Cold War was a reality and the inaccessibility that many went through, did play a major role in the Eastern Heavy Metal (and general Music scene) in the late 80s, early 90s.

Malokarpatan’s third full length album, “Krupinské Ohne”, expresses that “tradition” of shaping sounds that are only possible within certain realities. It might sound absurd, I am aware of that. I do believe that you can find excellent Viking Metal in Brazil, not one doubt, but that is not comparable to – and some might hate me – growing up and refining ones taste, in a specific musical/social reality. The “Iron Curtain” did help – help LOL – musicians to grow and create something different, mostly due to the fact that their access to what was happening outside their borders, was (almost) totally unknown to them (and unreachable).

These 5 tracks hold various shapes of Heavy Metal music. It could not be any other way. It has a vast colour palette, giving the album a dynamism and a variety, that will unquestionably appeal to the trained listener. It has Traditional Heavy Metal moments, then it steps into Thrash Metal (classy, never modern). The Black Metal vocals, the acoustic guitar and synths! Refreshing and synonym of superior skills, I dare say. Building something New while keeping your feet in the Old. It is a particular sound, yes. Like many of their former countrymen (and the surrounding countries), their vision of what Black Metal was, and still is, does not go parallel to the immense mainstream (and the less mainstream) acts. And it personifies Bathory’s “Hammerheart” stage as soon as you press play! COULD IT BE ANY BETTER THAN THIS? Hardly.

Do not come, expecting some copy of this or that! They are Black Metal, but the genre does not, alone, hold all the influences and elements that this bands puts into their Music. Acoustic guitars and very, very well played (and placed in every song) Synths, give the body of the album an enormous WOW! It is also possible to hear those Folkish bits, here and there, sort of stating where the band comes from. Please, if you do dare to embrace this endeavour, keep in mind that this is not your “run-of-the-mill” Black Metal band, no! These gentlemen do have a different view on the Music they took as theirs, and you can see and hear that throughout the album! Tremendously amazing!

Yaldabaoth – “That Which Whetes The Saccharine Palate”

“Totenheer set the novella “The Black Spider” by Jeremias Gotthelf from 1842 to music with 14 songs. The story tells of farmers in slavery in the 13th century in the Emmental. Under the threat of death, the tyrannical bailiff forces them to plant a hundred full-grown beech trees on the castle hill in no time at all. In their distress, they gave the order to the devil. As a reward, the devil desires nothing much, nothing more and nothing less than an unbaptized child. In a wild and stormy night, the devil fulfills the order. The peasants, however, try to trick him and cheat him out of his wages. But his revenge is terrible: the devil sends them the black spider, a symbol of the plague”. The musical expression of a written tale, presented to us in an overwhelming melodic existence: when trading with the Devil himself, be extremely cautious…

Totenheer, hailing from Switzerland, have in “Die schwarze Spinne” their second offering, after 2017’s “Wüetisheer”. Their Black Metal? Abundantly melodic! Fast and piercing guitars and a very solid drumming, give their music strength and consistency. But the band crafted something that goes beyond the borders of your standard Black Metal, Nordic style or South European style. Foscor, for example. A Black Metal basis, yes, completed with elements that create a sifferent sort of creature. Structured Black Metal with rasping, harsh vocals, telling the Tale, punishing the listener with continuous well executed guitar hooks. Side by side with the aforementioned melodic element, we can find this mid paced, slow and heavy side to the band. And this is where, in my opinion, they gain the most, with a very full sound! Yes, the productions does help, but you do need to write the riffs, correct?! The fact that they sing in German, does add that aggressive, warlike “taste” to their music. Very long tracks for a Black Metal release, but despite that facet their songs flow quite easily and effortly.

They do not reinvent the wheel nor present us with this master piece of the genre, but they do deliver a quite interesting record that will please many of those avid Melodic Black Metal fans. Like Symphonic? You might find something of interest in this band. And sometimes, not “reinventing the wheel” does not mean creating something that as not a special something to it.

Norway has been in the forefront of Black Metal since the late 80s, early 90s. From that cauldron many potions have been conjured, and many exquisite (and essential) pieces of Black Metal have been shaped. Some bands were able to build a bigger reputation than others, and their names still linger on until this day. Some of those names became quintessential for the Black Metal enthusiast, and a “must listen to” releases! Growing up, as a band, alongside bands like Enslaved, Darkthrone, Emperor or Mayhem, just to name a few, did not make their life easy. The good thing was, most bands were doing something unique, most bands had their own sound, which did help all those bands get a bit of recognition, in a way.

Tulus was one of those cases. 1991 marks the year the band formed, and 1996 the year they released their first album “Pure Black Energy”, which is seen, today, as a Norwegian (semi)classic.

They released 4 more albums after that one. After the trio decided to pause their career, Khold came to be. A different approach to Black Metal from their previous… existence.

By this time, more bands from the Black Metal scene were doing things differently. Khold had elements, in their music, that Satyricon incorporated earlier in their sound (“Rebel Extravaganza”). But we are not focusing on what brought us here: Tulus’ latest offering. And please, by any means am I comparing Tulus to Satyricon. Not in a million years!

Tulus’ sound is quite simple: Thrash Metal elements intertwined with the 2nd Wave of Black Metal and some bits, here and there, of Rock n’ Roll (on the dark side of the genre). The guitars “float” in this axis: Thrash Metal – Black Metal. They bring nothing of new to the table, and simply follow the templates they – Norwegians – so well conceived.

A little over 30 minutes and we are done. Did we get over excited and looking forward to returning to this release? We did not. It is extremely unidimensional – once again. In a musical world that wants their Black Metal rawer and rawer, this approach might not be the option, but I am well aware of the band’s history and musical background, to expect anything else than this. And who will like this? Every single one that likes Norwegian 2nd wave Black Metal, clean production (non-challenging music… had to say it). Am I sounding like a prick?! I might. In the end, Satyricon fans might find, in Tulus, a point of interest. It is well executed Black Metal, it simply does not add anything to the genre, the most inventive of them all…

Well, we are all aware of the fact that some names, within the Heavy Metal community, are a more than verified sign of quality. Men and women of many crafts, always pushing boundaries and challenging the listeners, taking him to worlds he never imagine possible. It is a hard task, I believe we can all agree on that. Some musicians are never satisfied with what they have created. Always eager to break another wall, tear down another juvenile and useless musical convention. Music has no limits, and it shall remain that way! But no more loose words, please. Music is the Message. All hail the Messenger.

Such a… non conventional introduction, I am aware of that, but this a non conventional release. But, who lives behind such a dirty and schizophrenic musical ritual?! Ever heard of things like Gnaw Their Tongues or De Magia Veterum or even Hagetisse?!?! Well, then you know, quite well, what to expect from such a “maniac”. I first heard of Maurice through his (main?) project Gnaw Their Tongues (from the Netherlands). At first, it was a shock! I had never heard something quite like that. It was not rawer than several other things I was listening to at the time… it was simply different.

Dodenbezweerder, one of his 34556677898 projects/entities/whatever he comes up with, is less on the schizo side, and more on the rawer side. It is Black Metal, it is Noise, but mostly Black Metal. I dare say that if it was not for the “clean sound”, this would fit The Throat’s rooster, impeccably (you don’t know The Throat?! What are you doing? This is Black Metal, chap). They are, in fact, a Black Metal act, but given the members historical, this entity lives in more than one sphere. Ritualistic, yet Noise, as noted before; Black Metal schemes, raw! It is not an easy listening, but fans of Black Cilice (the ones that do endeavour into unknown regions of the Black Metal psyche, might come out enchanted by Maurice’s abilities. Lengthy tracks, guiding you into the deep pits of Hell. It is always a nice ride, I say.

Overall, one has to be prepared for a harsh and aggressive attack on your senses. Beware, for Evil lives amongst Us!