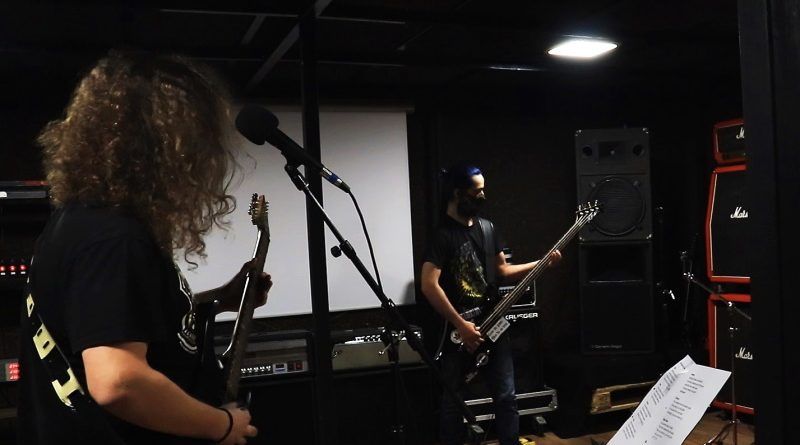 Consisting of the songs “The Wheels” and “Fire”, it is a sudden awakening that intends to relaunch the project with maximum momentum. “Fire” was inspired by Pedrogão Grande’s wildfires that happened in 2017, specifically the first-hand experience of loved ones of vocalist Freitas. It tells a story of survival, but also of pain and loss. It serves as a call to action to fight a problem that plagues thousands of lives every year.

“The Wheels” is the studio recording of a track played on “Live na Loja” at the end of 2020. Inspired by Ezekiel’s biblical encounter with angels, in particular the “Ophanim”, the wheels of God’s chariot. A lunge at the Church’s “Empire of Greed”, it plunges into the search for meaning in moments of great despair in which not even the angels can help, since “God isn’t dead, he just left”.

The result of years of homemade recordings and unfinished projects, Aoidos was created in late 2019, between cups of mead at the iconic Taberna 58. With a Soundcloud full of unused riffs, Freitas (guitar / voice) found in drummer Victor Gonzalez a suitable musical partner. Only one year after that did Ekid, an old friend of Freitas, go on to become Aoidos’ bassist. Two years later, and with the departure of Victor from the drums, Aoidos returns, recording with session drummer Chris Barber through the portuguese platform Musiversal.

“Fire” is the band’s second studio release, and having already several songs recorded and in the process of being finalized an EP is guaranteed for late 2022, or, who knows, even an Album.

“Aoidos” means bards in Ancient Greek, and like the bards of old, our purpose is to tell stories, but through the Dark Arts of Metal!