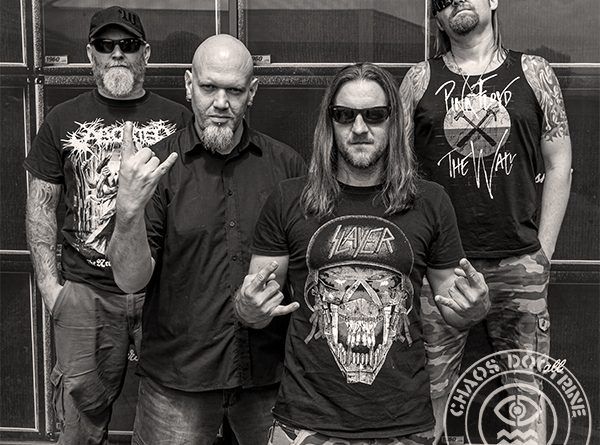 As if this 180-bpm prodigious track was not already vicious enough, the scathing “lubok-core” vocals of Demether Grail chunters the tune to an even murkier level, resonating with the dark subject matter marred by the life and times of the notorious russian monk Grigori Rasputin!

Chaos Doctrine comments -“A short while after we finished writing Father Grigori, we had the idea of getting a Russian vocalist to collaborate with us on it, specifically for an alternate version that can go onto our next EP (our first EP, The Chaos Chronicles Volume I, contains alternate versions of tracks from our debut album). We knew that Russian would give it a new and unique feel, and bring a rawness that comes with the language! We didn’t know where to start looking – but our good buddy France the Planet referred us to a great female metal vocalist Anna Hel, who is involved with Russian Industrial Band Conflict. She, in turn, referred us to Demether Grail, who is involved with a load of great metal bands in Russia.

Demether has a great voice, is really into Rasputin himself too, and fully understood what we wanted to do. With us having translated our track “The Genocide Number” into Afrikaans for our EP, we knew that this is no easy feat – it is not only about the lyrics, but also the rhyme and meter of the song. But, Demether did a better job than we could have ever hoped for – he took our track, re-wrote all the lyrics, and blended the words to fit into awesome rhythms. He stuck to the original themes but fully made the track his own, and his vocal is raw and brutal, bringing a fresh and hateful edge that would make the mad monk proud! We knew Russian vocals would up the ante on this track – but we didn’t know just how much. So, we decided this is far too great to hold back for our 2021 EP release – hence us throwing it into the world now!”

Demether Grail adds – “It’s an interesting story. Anna wrote to me and said that probably I would be the best guy to work with Chaos Doctrine on translating an English track about Rasputin into Russian, and to do the vocals for it. I have been writing lyrics and cross translating for a long time, for my own bands and other Russian bands, so this was no problem for me. I decided to add in quite a bit of my own into the Russian version – firstly because I am very well acquainted with the story of Grigori Rasputin, and secondly, because I translate one hundred percent literally. I made sure to keep to the original vocal rhythm as much as possible and stuck to a more timbre vocal, rather than the black metal style I usually use. Chaos Doctrine was my first international collaboration and the mix came out perfect!”