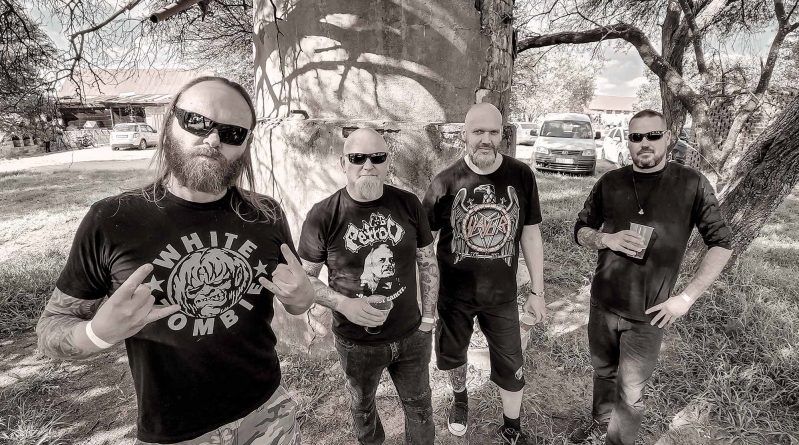 South African Industrial Thrash Machine Chaos Doctrine (two times on our Tops, on 2018  and 2021) is back with a new single from their forthcoming third album. More accurately, Chaos Doctrine is back with TWO versions of the same single called ‘Martyr. But, this time, the Industrialised Thrash Metal Machine is delivering something very, very new – in two different ways! And you can hear them both below:

The last time you heard from the Johannesburg-based 4-piece was Friday the 13th of May, when they dropped their enormous 200 bpm “Lifting the Veil”. However, “Martyr” is nothing like anything you have ever heard from the band before! To begin with, “Martyr” substitutes Thrash with melody, speed with multiple orchestral arrangements, and driving riffs with complex guitar pieces, rounded off with haunting acoustic guitar sections. Band guitarist and production engineer Alec tells us a bit about where the song comes from …

“When I wrote this song, it was so different that I wasn’t sure if it would fit our sound. But, (vocalist) Dr D loved it – and we realised Martyr was just another way of pushing the boundaries of what Chaos Doctrine does, obviously without compromising our unique approach and metal foundation. Writing Martyr let me explore facets of my guitar playing that I haven’t done in years – melodious riffs, a solo that is more old school rock than thrash metal, and the acoustic pieces that are reminiscent of late 70s Sabbath, or even the Randy Rhoads Ozzy albums. But, I still wanted pieces that are heavy, ensuring that the emotive elements of the track are very dynamic. I also wanted to compliment my guitars with strings to add to the overall complexity and dynamism of the song. This ended up being quite the adventure! Sure, we have done loads of keys in our tracks since the beginning, but never to this scale. Bigger ensembles is something we will definitely explore more in future tracks!”.

“Martyr” also provides  something else you have never heard in an original Chaos Doctrine composition … wait for it – clean singing. Yes, clean singing. Dr D had this to say …

“The first time I heard this track, I must have listened to it 3 or 4 times. I was blown away. It was so different to anything Alec had written before, I knew the vocals had to be very different too. It had to convey the same feeling that the music does”.  He continues by adding “Martyr tells the tale of a missionary or prophet of sorts that ends up being burned at the stake by the very people that was the focus of all salvation efforts – finally landing said holy (wo)man in hell. I wanted my vocals to create something eerie, like Paradise Lost meets Ozzy meets Pink Floyd, to convey the frustration of the lyrics. I then infusing my more signature sound in between to bring the absolute rage underpinning the narrator’s story. We think it worked!”.

To compliment Dr D’s clean singing, “Martyr” also brings us another first – angelic female vocals. It is known by now that Chaos Doctrine is very fond of collaborations, and it is this fondness that delivers the alternate version of “Martyr”, called the ‘Jeanne D’Arc Mix’ (the original version goes by the title ‘Clement V Mix’).

Said angelic female choir is delivered by Laura Cayser, better known as Capgras Delusion‘s frontwoman Blanque. Why Laura? Dr D shares that “The first time I saw Capgras Delusion, I was blown away by Laura’s voice. Shortly after, Alec wrote Martyr and I knew her voice would be perfect for all the pathos and rage the track needs!”

Laura had this to say about working with the band … “I really enjoy this track, it’s very haunting. The lyrics are poetic and give the sense of desperation to save people and instead being turned upon. It resonates with me personally and I’m glad I was able to be a part of this journey!”

Finally, artwork. While Chaos Doctrine is no stranger to symbology, “Martyr” delivers another first here. “Usually i produce the digital art for our tracks, but for Martyr, we wanted something special”, explains bassist and visual artist Phil. “We landed on the idea of a 16th century etching, in the style of artists like Dürer, portraying the martyr as a jester. We thought Lisa Botes from Art Defrosted would be perfect for this commission, and we were absolutely right!”

Artist Lisa Botes adds: “When I was approached by Chaos Doctrine to create a visual interpretation of the theme behind their new track, I jumped at the opportunity. The ideas that I was presented leapt out of the page, showing the martyr on his knees, a joke to all, giving his all and still willing to take and give more. The idea was to create a piece of art which looked like an aged etching or print. This piece was drawn in pen, with various techniques used for shading and creating focal points – showing the crowd to be perceived in the dark and the martyr in his own perceived light”.