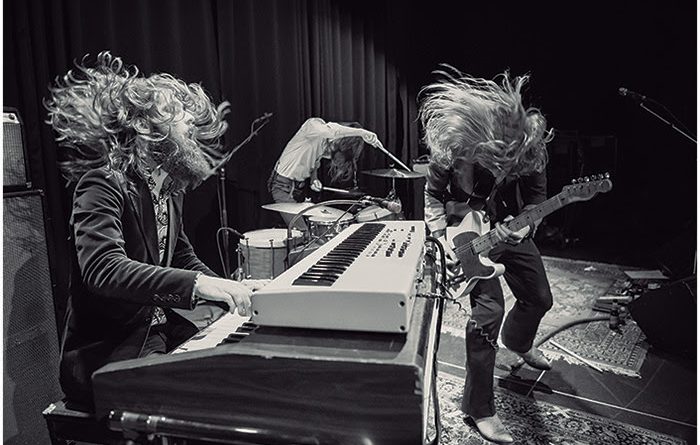 Psychedelic-blues renegades DeWolff return to display the full force of their live experience on their new record ‘Live & Outta Sight II,’ which will be released on Mascot Records on 14th June, 2019. Check out the video for Big Talk (Live) here:

Following the release of 2018s ‘THRUST’ and the acclaim that followed, the band picked up the prestigious Dutch Edison Award for ‘Best Rock Album’ in February, which capped off an incredible 9 months and saw the band play over 100 shows across 13 countries – The Netherlands, Switzerland, France, Spain, Germany, Belgium, Lithuania, Italy, Denmark, UK, Czech Republic, Austria and their first trip to Indonesia.The live album was recorded over their 2018-19 tour of the Netherlands; during DeWolffest 1.5 to 2000 fans at Tivoli, Utrecht on December 29th 2018, the beautiful old theatre Luxor Live in Arnhem on January 10th 2019, Paard van Troje in Den Haag  (The Hague) on February 1st 2019 and the EM2 in Groningen on December 6th.

Talking about the shows, singer/guitarist Pablo van de Poel remembers; “Utrecht was totally epic because Gibson Guitars gave us a Gibson Firebird guitar for the occasion that we could give to a fan. So we organized a competition where people had to post videos of themselves playing a DeWolff song on guitar and the “best” video would win this guitar.” The winner of the guitar, Sonny Ray, joined the band on stage to play. They were also joined by best friend and former guitar tech Stefan Wolfs. “Stefan is a great guitar and pedal steel guitar player himself. He’d been out of the game for some time because he was seriously ill. So it was quite an emotional moment when he went on stage for the first time in almost half a year,” Pablo says.

Many of the songs on ‘Live & Outta Sight II’ are taken from ‘THRUST,’ which is a testament to how well the songs have connected with the fans. Pablo explains, “Once we started playing the songs from our new album live they start living their own life. We use the album track as a foundation and playing together, having fun, somehow always takes us to a 2.0 version of this song.” The record includes new fan favourites ‘Double Crossing Man’, ‘Deceit & Woo’ and ‘Big Talk’ as well older favourites ‘Medicine’ and ‘Don’t You Go Up The Sky’.

Stoner/doom metal band PINTO GRAHAM have now released their song “Southern Superstitions” for streaming via Bandcamp. The song is from their upcoming album Dos which will be released in July. Listen to the song/Pre-order Dos here:

Hailing from New Haven, Connecticut, southern rock trio Pinto Graham serves up psychedelic riffage that pulls audiences to their feet.  The diverse musical experiences of bassist/vocalist Ant Reckart, guitarist/vocalist Andre Roman, and drummer Brian Harris make for a perfect meeting of groove, grit, and melody.  With influences ranging from Lynyrd Skynrd to Pentagram — both of whom they pay homage to with their band name — Pinto Graham will shake, rattle, and roll any stage they set foot on.

THIS GIFT IS A CURSE are now releasing the second new track, taken from the band’s upcoming album ‘A Throne of Ash’, to be released via Season of Mist on June 14. “Blood is my Harvest” can be viewed below:

The experience that is ‘A Throne of Ash’ consists of poisoned blood, dying flesh and the dark ash from the charred body of man – both on a physical and astral plane with the underlying notion that nothing that transpires in what we call ‘reality’ has a greater meaning.
THIS GIFT IS A CURSE vomit forth a steady stream of pitch-black venomous hate. The Swedes passionately demonstrate that black metal remains fertile ground for new sounds. Combining elements of hardcore and sludge with influences from occult black metal as well as drone, ‘A Throne of Ash’ sets a new benchmark for vitriolic viciousness and massive sonic onslaught. The third full-length of the band from Stockholm has turned out to be a vision of darkness that seeks its equal.