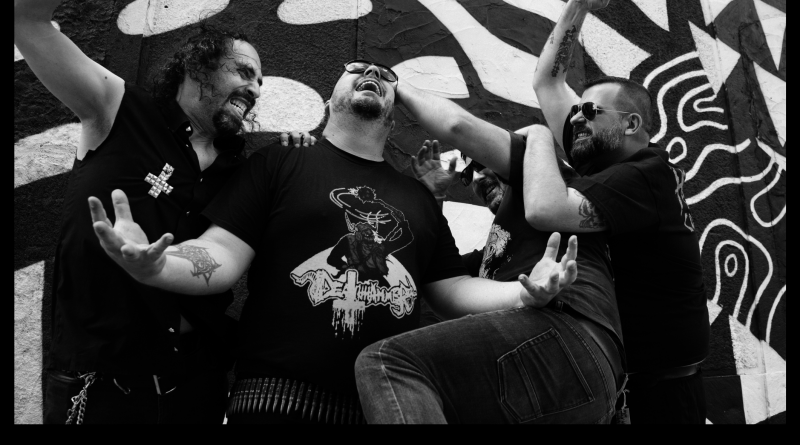 Martelo Negro‘s sacrilegious sound was founded in 2006 by The Beyonder, then under the moniker Black Hammer. Between 2006 and 2009, the band released the EP Winds of Carrion (2007), and in 2009 the singles “Hierofante em Chamas,” “Sob os Cascos de Satã,” and “Bela Lugosi Is Dead, Buried and Forgotten,” all as a one-man project. Also in 2009, the band’s name was changed to The Beyonder’s Portuguese mother tongue, following a suggestion from Belathauzer, a fellow metal brother.

In early 2010, The Beyonder puts this plan into practice, but he also added something more to the mix: the band was no longer a “one-man project,” and became a lascivious and devastating heavyweight quartet. For this early stage, Melkor, Bwzwys, and Asmodeus were invited to join the Martelo Negro ranks with The Beyonder. During this time, the band rehearses thoroughly in order to be able to build their evil sounds. However, during Christmas 2010, Asmodeus left the band due to personal reasons, and his position was occupied by the nefarious Thamuz (aka Wolfgang).

With this new lineup in 2011, Martelo Negro leave for a series of infamous concerts in the Portuguese territory, and in late 2011, their first full-length, Sortilégio dos Mortos, is released, setting the pace for a 2012 bathed in blood! In late 2012, Bwzwys Narconomikon left the band due to irretrievable differences, being replaced by the infamous D-beat assassin Arrno Maalm (Filii Nigrantium Infernalium, Namek, Ironsword, Atentado).

In early 2013, the band started recording Equinócio Espectral, the first part of the “Antimatéria” trilogy, being the effort of a renewed lineup at its full force and blasphemous might. The album was released in early 2014, this being the perfect timing for Martelo Negro to endeavor into a new promotional cycle across Portugal, defiling graves, whorehouses, and churches with the single purpose of spreading the words of the horned Jesus, the one who has always lurked beneath…

And then came a five-year slumber for Martelo Negro, with the band occasionally awakening from its hibernational grave to profanate random stages. But now, 2019 marks the return of Martelo Negro to the discographic market with a blistering new album and onto the stage of the world-renowned SWR Festival, after their well-received performance there in 2014. Fucking off everyone and fucking every trend, Parthenogenesis is the band’s return to anti-matter sonic vomit, a cacophonous conjuration of evil invocations and onanist celebrations in the name of the ALMIGHTY and ABSOLUTE ZERO dissolved before the inevitability of NOTHING, as only NOTHING is real!

Some bands pose metal, some pose thrash, but nobody can get realer than Martelo Negro‘s blackest-of-the-black, thrashing-evil HEAVY METAL. Against the modern world, their long-awaited Parthenogenesis is the violent enema the underground scene so desperately needs!

Hear for yourself with the new track “Rameira Necromante” below:

Preorder info can be found HERE. Cover and tracklisting are as follows: 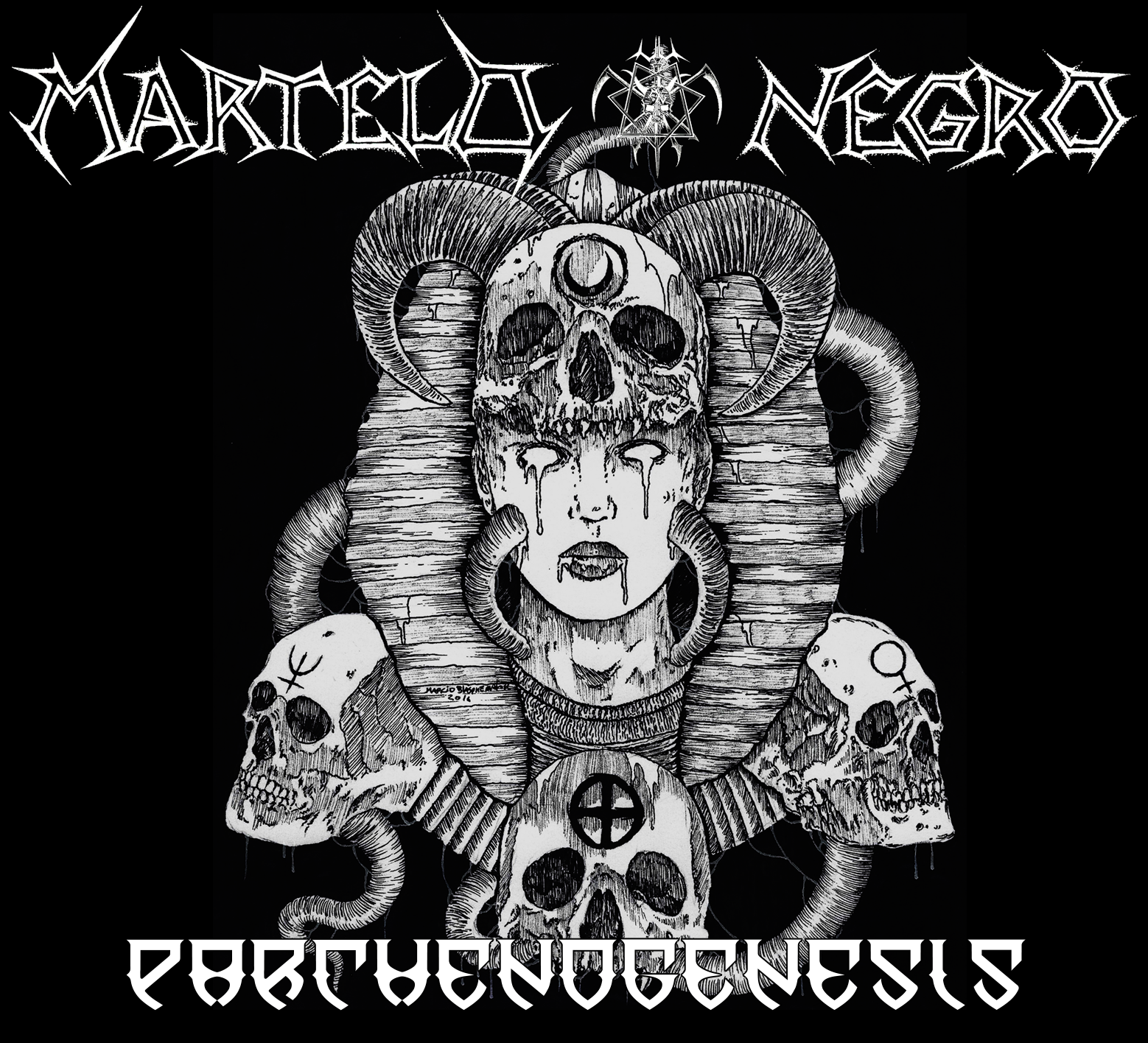 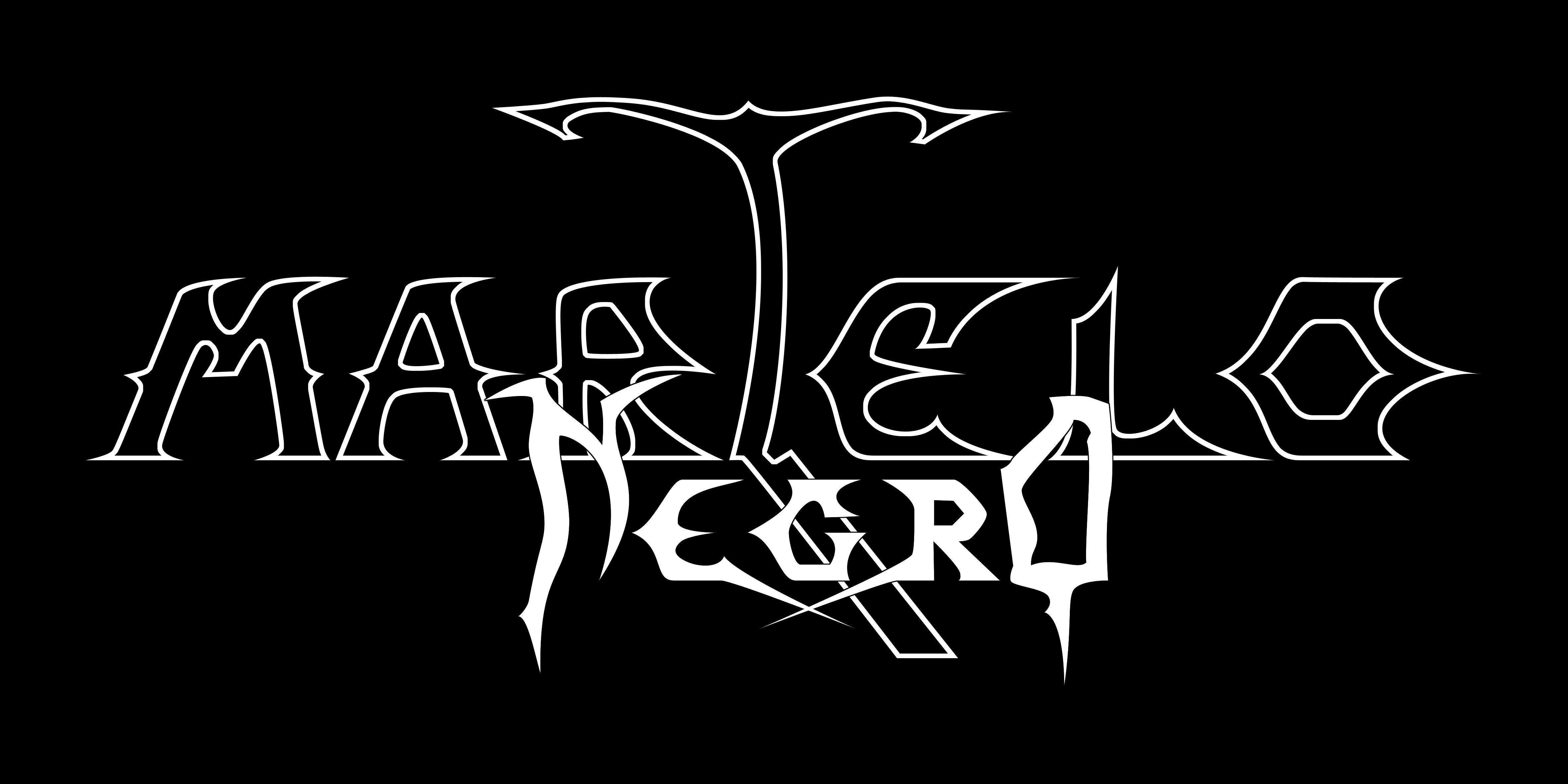