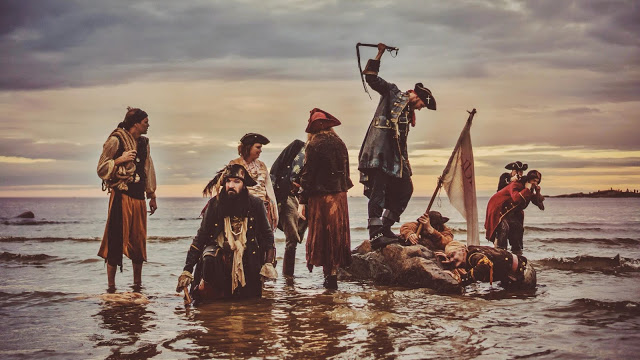 Known for their excellent taste and passion for pirates in metal, Napalm Records welcomes a new band to their diverse and exciting artist roster and label family: Ye Banished Privateers have signed a worldwide record deal with Napalm Records! The band’s 3rd studio album titled ‘First Night Back In Port’ is set to be released on June 30th 2017.
Ye Banished Privateers takes you 300 years back in time for an imaginary journey through the harsh life at sea during the early 18th century. With songs inspired by traditional Irish and Scandinavian folk music, acting and elaborate historical clothing the privateers tell a story about the rough sailor’s life, lived on the other side of the law – and the fight against oppression and nationalism.
Together, the nearly 30 crew members take turns to go on tour and plunder, and with around a dozen sailors on stage no two shows are ever the same. The mix of rude folk and punk music invites you to dance and sing along, while the gripping ballads will make the toughest pirate heart soft.
Says the band about their recent signing with Napalm Records:
“Spring has finally come to the Gulf of Botnia, and with the rotting ice we are now able to set sail with some extraordinary good news onboard. We are immensely proud to announce that our chaotic band of Pirates will be joining forces with Napalm Records, to release our next album First Night Back in Port. Lock up the taverns and hide away the Rum, June 30th in the year of our lord 1717 (2017), this Pandora’s box of ear worms goes worldwide! Putting our pen and ink to the chart of Napalm Records means procuring the fire power to bring the forces of Europe to a total blockade. And by trading our royalties for rum and cherry beer, we estimate that we will save a fortune and a half in the years to come.”