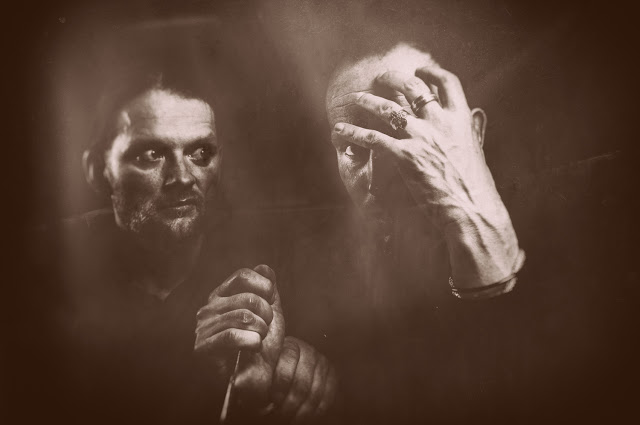 Bitterfeldt is one of the good names that we saw coming from Germany lately. Their debut album gave us remembrance of those classic gothic metal names that influenced a whole generation like Crematory and Lacrimosa although they’re showed many more than that specific sound. Micha, responsable for vocals and keyboards (and also visionaire and an ex-member of Evereve) was kind enough to clear out all our doubts and tell us more.

WOM – Hello Micha. Let me start to say that Bitterfeldt’s debut is intringuing, you don’t seem to fit it in any genre specifically (although having elements of various one) . That was your main intention for Bitterfeldt?
Micha – Bom Dia Fernando! Actually I am interested in a wide variety of musical styles and genres. I listen to classical music as well as to avantgarde pop and independent stuff – and also to electronic music. But of course my favourite music was, is (and probably will ever be) “dark“ music, especially dark extreme metal! I also discovered Gothic Music in the 90´s, but my roots have always metal-ish. The first band I adored (and still do, especially the old stuff) was Iron Maiden as I bought the Powerslave album. I soon switched to more extreme metal bands such as Slayer (still rule!), Kreator, Exodus, Celtic Frost, Death, Morbid Angel, Pestilence, etc. And I always liked the slow real heavy stuff, e.g. Asphyx, Triptykon or Neurosis. So with bitterfeldt it is like a return to my roots. But you might find some of my other influences in the songs, too. That´s maybe the the cause why Bitterfeldt sounds so unique.

WOM – Can you tell us how Bitterfeldt was created? As a concept and musical entity?

Micha – My vision was to create something real intense, deep, dark and epic. And I tried to share this vision with my musical partner Sascha (second half of Bitterfeldt) who liked the idea, too. We wanted to build a massive wall of sound and atmosphere, coming over you like a bulldozer… Love it or hate it, but do not ignore it. And if you are open-minded, you may find yourself on a psycho journey through different emotions, facing your inner demons, haunting you by reveiling your subconcious fears. So the songs are about ten minutes each to “tell a real story“. With this project I do not care about the “classical rules“ of songwriting, I just did what felt right to me. We also included some atmospheric parts in the songs that sound like a movie soundtrack. Very psycho and gloomy parts with a lot of ambiance, sound effects and strange noises.

WOM – How do you see “Götzen.Dämmerung”, now that it’s released? Turned out the way you hoped?
Micha – Considered from an overall perspective I would say “yes!“. Of course there is always potential for evolution, for improvement – so in the next album we will try to do some parts even more intense and powerful, maybe add a few more guitars. But I am happy with the album. It sounds good, the artwork is brilliant, and we managed to create an entity (as you wrote above) of music, lyrics, art, photos and the videoclip.
WOM – How the reactions to the album have been so far?
Micha – Bitterfeldt is definetely no easy-listening- stuff. You have to take your time and open yourself to the concept and the melancholic intense mood. So we expected that a lot of people will have difficulties to take part in our dark journey – and that they might not like it. But actually most of the reactions have been pretty good so far. Of course our former activities in other bands have helped us, i.e. we are no newcomers but old men being active in the metal scene for ages… But we really appreciate the positive resonance of the press and the fans with their interest in the band. Bitterfeldt is about being authentic, not about selling millions of records. We want to express our creativity – without any restrictions or the usual business thoughts and rules in mind. If people keep on enjoing our music, Bitterfeldt will prevail.
WOM – It’s entirely sang in german. Do you see in the future singing in english?
Micha – You are right: lyrics are in German. I have done 6 albums with EverEve with almost 100 percent English lyrics so it was time to try something new. But you will find some translations on our website and also in the album booklet So everyone will be able to understand the lyrics. Maybe in the future we will do some songs in other languages, too – but at the moment it feels good to write and sing in my native language.
WOM – Do you plan to tour outside Germany?
Micha – Bitterfeldt is something special – and so are our live gigs: they only take place on special occasions at special locations. In may we will headline a small but nice festival in Germany to present the whole album in a very special way. But having toured throughout the years with EverEve I enjoyed playing in different countries, meeting nice people, discovering other cultures and visiting places I have never been to before. So if we get the right offers, it would be a pleasure and honour to come to your country, too…
WOM – One band that came to mind while listening “Götzen.Dämmerung”, were Crematory. Not quite literal with what they’re been doing lately but with some of the atmopsheres of the old days. They were a band that evolved during their carreer. That must be a hard question to answer but I’m curious… do you see yourselves changing a lot in the future? Nobody knows what tomorrow will bring but have you any idea of what kind of music you want to explore?
Micha – (Laughter) This is really a hard question to answer. First of all it is funny that you mentioned Crematory. Because we seem to have quite a history with this guys. Of course if you are around in the scene for many years you meet a lot of people and other bands. With some of them you stay in touch, especially when you appreciate what the other guys are doing and if there is some kind of mutual interest or sympathy. Some of these guys turned out to be kind of “longterm-companions“ (e.g. the guys from Lacrimosa, Destruction, VNV Nation etc. etc.). And with Crematory this happened to be as well. First of all we toured a lot with Crematory – and for some years we even had the same management. So maybe these are the reasons why our paths crossed quite often. And – as you might know – Matze, Crematory´s former guitar player plays now in Bitterfeldt… But now let´s turn to your question: I think there might be some minor developments and changes in the future. People develop and so do bands. But I am pretty sure that these changes will not be too big concerning the Bitterfeldt style. We will try to do the next album even more intense, heavier and darker. And as I told you I am thinking about including some more guitars. But we will definetely not change our style too much. It will always be slow, deep and hard music!