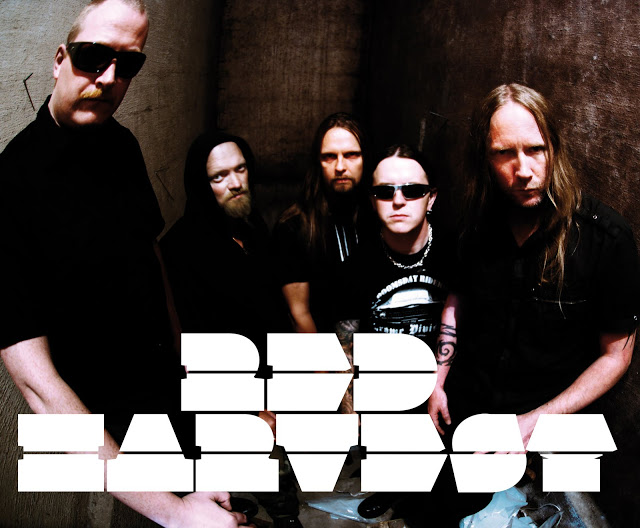 Red Harvest is one of the most inventive bands that came out of Norway. When they ceased to be in 2010, it was a great loss for the extreme music. Fortunately the absence wasn’t long and the boys are back. Before releasing a new album, they re-released one of their most influential albums, 1996 “Hybreed” with a few extras – you can read the review here, in portuguese – in a package that we strongly recomend. Red Harvest were extremely nice for answering our questions and here’s what we got. WOM – Greetings and salutations from Portugal! Let me say that it’s mighty good to know that you are back. Before we focus on the “Hybreed” re-release, could you tell us what were the main motives for breaking up in 2010 and how/why did you returned?
Red Harvest – When we decided to stop playing in 2009/2010 it was just because we really had nothing more to give at that point. And then trying to push the process of a new album and knowing we would not be able to tour, just felt pointless. So we thought it was best to take a break before we ended up as enemies. In 2016 there was a festival in Norway that asked if we were interested in doing a concert, and since we are all good friends in the band and really had nothing better to do, we though why not? And that felt great, so we decided to play some more gigs and try to finish an album in one way or another.
WOM – About “Hybreed”, this re-release is essential even for those that already have the original album. Did you were closely envolved with the overall process?
Red Harvest – Yes and no. Of course we helped out getting the old files and approving the remastering, but except for that it is all Cold Dark Matters great work. And of course we fixed the bonus tracks.
WOM – Personally I always considered that “Hybreed” is a kind of turning point in your carreer and in metal in general. It was released in 1996, year of many other ground breaking albums, and even it has more than twenty years old, it sounds fresh and powerful. Do you see it as an special album?
Red Harvest – Yes, it is a quite special album, cause at that time it was quite avant garde and groundbreaking. It kind of set the standards for how Red Harvest works and try to progess.
WOM – Do you’ll tour in support of the “Hybreed”‘s re-release?
Red Harvest – No, sorry. I guess not. But we will play some concerts here and there if we are able to.
WOM – You’ve became known as one of those bands that are constantly shifting and always reinvented yourselves. Expect the unexpected is your motto?
Red Harvest – (Laughs) Yes that is true. I once said that one of the most frustrating things in the world has to be a fan of Red Harvest. You never know what’s coming.
WOM – When can we expect the new album? Anytime soon?
Red Harvest – We hope to be ready in 2017. We have enough material, We live a bit apart from each other, so it is a bit more challenging to have good working progress, but we manage. So yes, I hope everything is ready in August/September. And then of course we need to get some nice artwork and stuff like that.
WOM – What are the main expectations for this second life?
Red Harvest – Less stress and pressure and pure more fun.
WOM – Thanks for this interview, it was a real pleasure. Any last words for your portuguese fans?
Red Harvest – Thank you too. Like you said, expect the unexpected !
https://colddarkmatterrecords.bandcamp.com
http://www.redharvest.com
Support World Of Metal
Become a Patron!