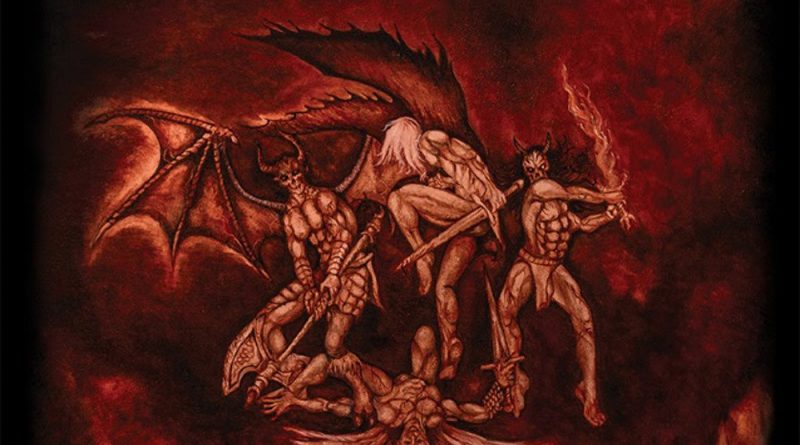 IRON ANGEL is one of the true cult legends of the German Speed Metal genre. Formed in the Hamburg-area back in 1980 and known for two classic eighties metal album “Hellish Crossfire” from 1985 and “Winds Of War” from 1986 and a reputation as a staggering live band.

The band has toured Germany with KING DIAMOND and in recent years they have showed they are still a live band to reckon with on festivals on Metal Magic in 2016 and earlier this year at the Headbanger’s Open Air in Germany.

The band also recently toured South America with big success. Now the time has finally come for the long awaited come-back album from the band – the first studio album in over 30 years! “Hellbound” released as a big priority in May 2018 worldwide through Scandinavia’s premiere metal-rock label Mighty Music

1. Writing’s on the Wall
2. Judgement Day
3. Hell and Back
4. Carnivore Flashmob
5. Blood and Leather
6. Deliverance in Black
7. Waiting for a Miracle
8. Hellbound
9. Purist of Sin
10. Ministry of Metal

In 1980 ones of five young friends from Hamburg, Germany, that decided to form a band of their own the same year, which they named after one of their peers most famous songs – Metal Gods. In 1983, after playing together for several years and incorporating influences from bands like Venom and Bathory into their NWBHM sound, vocalist Dirk Schröder, drummer Mike Mathes, bassist Thorsten Lohmann and the two axe-men Peter Wittke und Sven Strüven knew, they had to find a name, that would fit with their newly found style. They decided to call the band… IRON ANGEL.

The demos made it´s way to the office of the newly found label SPV /Steamhammer in late 1984, culminating in the signing of the band and the release of their debutalbum “HELLISH CROSSFIRE”, which became a blueprint for german speed-metal ever since. The following year, the band toured as opening act for King Diamond, right before releasing their second Album “WINDS OF WAR”, which was slightly different in style copared to it´s predecessor. Though more mature and melodic, the lack of fast songs and sinister atmosphere, that were on dispay on the debut album, was quiet noticeable. The reason for that was the bands own debate about their musical direction: One half wanted to become more apealling to the masses, especially to the american market, while the other ones wanted to keep their own way of playing speed-metal. Tensions grew bigger and bigger until in early 1987, IRON ANGEL decided to call it quits. After a couple of sessions they decided to revive IRON ANGEL. In 2000 they entered the studio to record the album “THE REBIRTH”, but before they could complete it, Peter died in a tragic car accident. The recordings were cancelled and the band remained inactive for the next 4 years. In 2004 Dirk and Mike tried to recruit new members for the band and worked on a new album, but even 3 years after, they couldn´t find any new suitable members, so they decided to call it quits again. As a sort of parting gift, they presented the EP “BACK FROM HELL”, which intended to showcased the band playing in a different style than usual. A couple of month after the split, Sven Strüven died.

It seemed like IRON ANGEL were dead and gone until that one day, when Didy Mackel (ex-Mania, ex-Not fragile) contacted his buddy from back in the day Dirk Schröder via Facebook, that he just witnessed a lot of people wearing IRON ANGEL shirts during a festival. While chatting the idea of a reunion came to mind. Dirk wrote Mike about it and Didy brought in the two guitarists Jojo Folta and Mitsch Meyer. Everyone met for the first time in September 2014 and the following month it became official: IRON ANGEL were back.

Word got around pretty fast and the band received offers from promoters and festivals all over the world, but before the band played their first show since the 80s, Mike announced his departure in March 2015, since the touring would interfere too much with his everyday work. After considering Mark Cross as a new drummer first, the band ended up recruiting Alexander “Schrotti” Kokatt as Mike´s successor in April of that year. The line-up, that played the first live shows since the 1980s was complete and together they managed to go on tour through south america and beyond. The following year Jojo Folta left IRON ANGEL and was replaced by Robert Altenbach.

2017 was inteded to be the year of a new album. Already back in April 2015 the band wrote the first couple of songs for it. Since Schrotti didn´t commit himself enough to the band anymore, IRON ANGEL decided to look for a new drummer and brought in Maximilian Behr in April. During June 2017 they headed off to Rosenquarz Studios in Lübeck to record the new album, which they named “Hellbound”. Besides 10 brand new songs, IRON ANGEL choose to included a re-recorded version of the track “Unnamed one” from their Metal Gods days, which was earlier released on an compilation-album. “HELLBOUND” will be released in 2018 (their first Studio album in almost 32 years!) and a lot of live dates will follow in it´s wake…