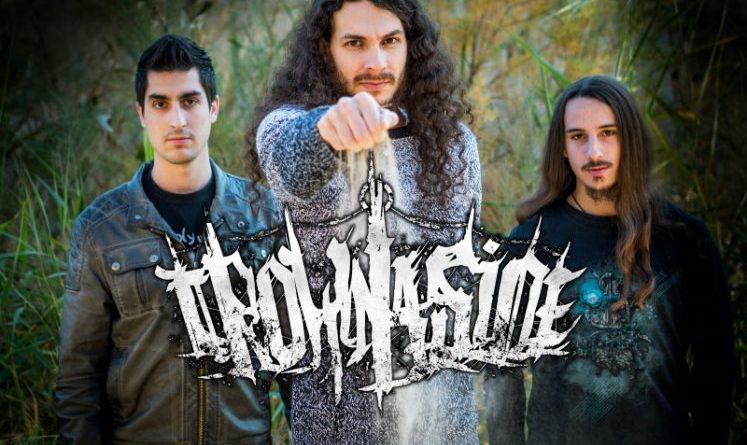 This one took more than expected, but here it is, our little talk with Crownaside, after they’ve released their debut album “From Mud To Ashes”. Gabriel Pastor, the frontman of the spanish band, talked with us about the recordings of the album also about the concept and many more. –  by Fernando Ferreira

Hello guys and welcome to World Of Metal.  Let me start by congratulate you for the excellent album that is “From Mud To Ashes”. Proud of your debut album?

Hello and thank you! We’re pretty satisfied with it and its sound. We think it reflects the mix of styles that we all tried to put in the band’s own sound.

The road to this album wasn’t easy. If you had to name, what would you say that were the most difficult challenges you faced for making and relesing “From Mud To Ashes”?

Well, without a doubt the biggest challenges were the changes in our line-up midway through the album’s recording. We had to re-record a lot of tracks and finish recording some others that weren’t finished. It was indeed a tough challenge for us that shouldn’t have been that difficult. The release went smooth. We worked with Qabar Extreme Music PR to help us with the release of the album, as we’re not signed with anyone at this moment, and he helped us a lot.

After all the changes in the lineup, how was the recording for “From Mud To Ashes”? Stressful?

Yeah, as I said that was the absolute worst part of the recording process. People left without finishing recording their tracks, or just didn’t want what they recorded to be used, so we had to re-record a lot of the album, and we also lost a lot of time in between that.

We know that “From Mud To Ashes” is a concept album about the mayan people. How did this idea came to be?

I, wasn’t sure about what to write about when we started. I tried different things such as our society, short stories or abstract concepts, but I felt like I could put a bit of everything if I went for a conceptual album. I was reading the Popol Vuh back then, and the ‘conquering’ of America was something we’ve all read about or studied, we all know about the discovery of America, but does anyone ever stops and think about all the horrible things that were done to the natives? Enslaved and massacred in cold blood.

Spain and Portugal divided the world in two and are responsible for making the world bigger. But also responsible for enslaving and destroying indigenous cultures. How is it, from your perspective, living with this great but also horrendous legacy?

Like it or not it’s part of our countries history, it’s not something to feel proud about, but rather to look back at it and try not to repeat all the things that were done wrong (which were a lot). The mindset has changed over the years, and I’d say there aren’t many people that would be proud about what happened back then. It’s important to have a critical view of our history and work to be better.

Back to the music, in the album you had some special guests, can you please tell us more about it?

Sure thing! Starting with Johan Brandberg, from Meadows End: We shared stage with Meadows End when they came to Spain and they were really amazing guys. We were also big fans of their music and the voice of ‘The Brute’ seemed to fit really well in ‘Scent of Burning Flesh’, so we asked him and he gladly recorded the voice tracks.

Then we have Drew J. Griffiths on ‘1492’, from bands such as The Ritual Aura, Obed Marsh or Ur Draugr. I am more a fan of Ur Draugr than the others (as all those bands are pretty different from each other). I didn’t know Drew personally, but I still gave it a shot and asked him just in case. And we got lucky! He’s such a great guy, he ended up giving lots of advice not only for the album but for the release and that kind of stuff.

Finally, but not less, we have Alejandro Ansón playing a guitar solo on ‘One Last Offering’. He is one of the most talented guitar players of our region and a friend of Álvaro, and it was a great opportunity to get to work together.

Being from our neighbouring Spain, can we expect some visit from you soon?

In all honesty we aren’t planning on touring in the near future, but we can tell you we’d love to visit Portugal sometime (the sooner the better!). Being so close to Spain it’d be amazing and easier than going to, say, Germany. We’ve also heard there’s a great metal scene there, so it’s certainly a great point to start a tour.

How about the rest of Europe? Anything planned for a big scale tour?

Nothing yet, we’ve recently closed our final line-up with a bassist, Santiago, so we’ve got some rehearsing to do, and we’re also working in our next album. However we’re open to everything in case any promoter is interested… (laughs).

You’ve started with an ambitious album, a concept work. Anything planned for the next one?

Without revealing too much, the next album will move around a certain idea. A very weird and abstract one. Stay tuned because it’ll be amazing!