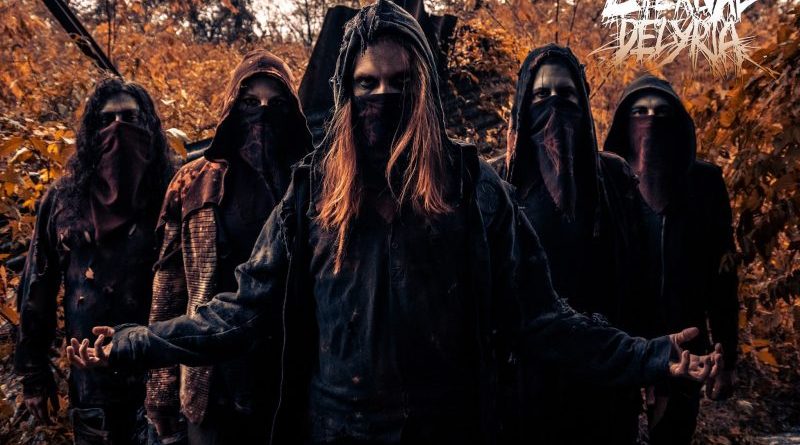 Melodic death metal is not a thing from the past and to prove that, we’ve got Eternal Delyria‘s latest release “Paradox Of The Mechanical Angel”. Curious to know more about their sophomore album and also about their history, World of Metal reached out to Switzerland to a good conversation with the band. – by Matias Melim

So let’s start with the basics: when and how was Eternal Delyria formed?

Eternal Delyria’s first nucleus formed in 2011 as a group of friends that wanted to spend some quality time together jamming. When the first couple of songs were completed, we decided that it was time to organize the first live show, and choose to try to grow as a band. As we grew the band’s commitment became more and more demanding, so we had to change some members along the road.

One thing that at least seems apparent is that Eternal Delyria draws major inspiration from “the human condition” theme – at least taking into perspective your debut release “Delirium” and also the most recent album. Would you like to give us some more insight on what is the major symbol/idea of your music (and obviously correct me, if I got it wrong)?

You certainly got it right! Our two LPs have the human condition as main theme, in Letting Go of Humanity we focused in the relationship between nature and human beings, while in The “Paradox Of The Mechanical Angel” the concept is about imprisonment in it’s various shapes and shades; so everything gravitates around human beings and the experiences we all have to share in modern times.

What bands or musicians would you say inspired your band as a whole?

We have a very wide spectrum o influences in the band, it’s hard to just name a few. We certainly mix northern European metal music (black and melodic death) with some more American “core” aspects, so we end up with this mix of melodic but also pretty aggressive and sometimes groovy music. If you want some names I’d say Dimmu Borgir, Dark Tranquillity, Born of Osiris, Lamb of God are the first few that comes to mind.

Do you consider your Swiss nationality to be a differentiating aspect of your music? It being a country that besides sharing three different languages and cultures, has its own culture and way of life.

The fact of being Swiss is probably an aspect that has some kind of influence on our band in general, not just referred to the music itself, but also regarding the way we approach the whole project management. In Switzerland we have a pretty big metal scene considering how small as a country we are, but on the other hand the scene is mainly made of underground bands, because there is no music business here. So we had to slowly grow using a do-it-yourself approach and by fixing many small achievable goals; even finding a venue to play live is almost impossible where we live.

Regarding our culture, we have a very strong working culture in Switzerland, many people live with only one goal in mind, being successful and make a lot of money, and artistic activities are seen more as a hobby and are considered less seriously; we try to avoid this kind of mentality, but in some ways it still influenced us and because of that I think we are less inclined to take risks. Many successful bands first toured with a fucked up van and zero cash, we prefer to wait maybe five years and tour with more safety.

Another thing I think relevant asking with more numerous bands is that if you consider your band to be more of a melting pot or a salad bowl when it comes to song-writing? Reformulating, is your music a mix of each musician’s musical preferences and background with someone organizing everything, or is there a more noted separation between each one of yours musical contributions?

It depends, we don’t always use the same modus operandi, the majority of our music comes from Claudio, our keyboard player, he can sometimes just show up at rehearsals with a whole song written and we just arrange the details together. But other times other members, even Lutz (who’s the vocalist but can play many instruments) have a song or an idea like a riff or a melody to work on so we compose at rehearsal or at home, in this cases the various members influences become more evident in the composition and arrangement of songs.

Following that up, do you feel that there are some influences from the band Screams of Suffering, despite them being a band from another subgenre, as two of your members were previously from that band?

I don’t think so, the shared members are in fact the more active composers of our music, but in Screams of Suffering the compositions are done by the founding members. We are friends with them and shared the stage various times, but I don’t see many musical similarities.

One more internationally-notable moment, that Eternal Delyria had, was your presence at the finals of Wacken Metal Battle of 2017, an event in relation to which you again took part in, this year. How was that experience and do you feel it changed your course as a band in any way?

The Wacken metal battle has been a fantastic experience, we met lots of friends and bands, so under certain aspects it helped us to meet new musicians around Switzerland and this opened us the opportunity to play more shows. We never make it to the festival because we always had to battle against amazing bands, but the overall atmosphere was very friendly.

Ok, let’s move on to “Paradox of the Mechanical Angel”. First of all, what’s the idea of the album and title?

The album started with a concept, the lyrics of the songs gravitate around various forms of imprisonment in (physical, ideological, metaphorical, social). Then we decided to make the whole album more appetizing by creating a story to complete the songs; we imagined a post-apocalyptic world where humans are slaves of a technological beast, a beast that arose after men developed new technologies without thinking about the long term outcomes. This beast, conquered the world, and after overpowering humanity challenged the gods by stealing an angel from the sky and turning it into a machine. So the Paradox Of the Mechanical Angel represents this paradox, humans try to use technology in order to gain more freedom, but they often end up slaves of technology itself.

One usual question is the one of: who did write the lyrics and who organized it instrumentally?

The lyrics are mainly written by Lutz, and so is the adaptation for the music, with our feedback at rehearsal or in the studio.

How has it been in terms of the fans approval?

The overall feedback has been amazing, people seem to enjoy it very much and we are extremely happy about that. On spotify the album reached over 20’000 streams, that’s something we never expected to happen and we are truly grateful. We’re a small band and this goals are a big motivation to keep doing what we do.

Did you had any chance to play it live?

Thanks to the ongoing pandemic the album has unfortunately not been played live, we had to cancel the release party we organized with our friends Redraw and Forsaken Legion and some other shows but we’re looking forward to play live the new songs!

So it appears that this was the first album in which you worked with third parties (at least taking into account what some sources say). How was it working with Studio From Hell and Sonitus Studio?

Studio From Hell is run by our guitar player Nyx, he produced the first EP Delirium and co-produced our first album Letting go of Humanity. This time, since we added a lot of orchestral elements in our music we recorded there all the DI’s, vocals and orchestrations; but for mixing and mastering we knew we had to work with a professional engineer/producer. We choose Sonitus Studio because we knew Tommy from playing with his band Genus Ordinis Dei a couple of times and we knew how good he is in producing symphonic metal. Working with him was a pleasure and he really exceeded our expectations.

I usually like to finish these interviews asking when it’s planned to start a tour, but considering the current pandemic situation, I don’t think there are any solid plans (correct me if I’m wrong). So I’ll ask instead of that, if in the next tour you expect to leave your nation and start roaming around neighbor countries?

That’s the plan, we all agree that our next goal is to tour around Europe, probably as opening act for some bigger bands, but we don’t have anything planned till now; this corona virus issue is a pretty big pain in the ass, so we’ll wait until everything settles down and we’ll think about the tour when live shows will be allowed.

To conclude: any message for the Portuguese fans?