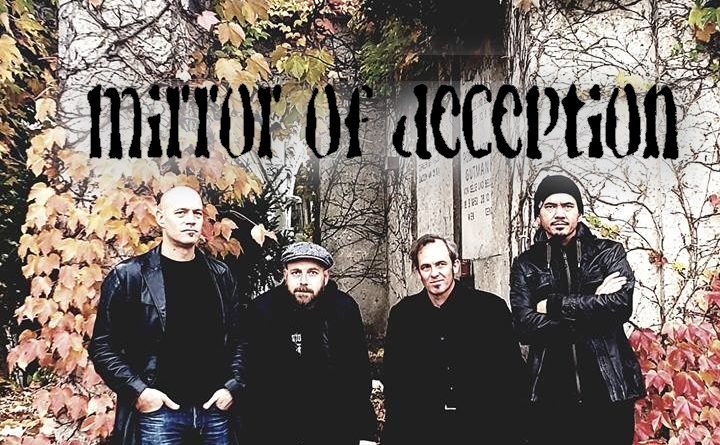 Mirror Of Deception are one of the greatest regarding doom metal and after regarding a huge album called “The Estuary” released in 2018, World Of Metal couldn’t miss the chance to talk with the guys. Actually, talking with Jochen Fopp, one of the founding member of the mighty Mirror Of Deception. So step in to the doom…

Hello and welcome to our World Of Metal. I must say that it’s a honor to talk with you. I’ve follow your work for quite awhile now – the first time I got to know you was when I was looking for bands for World Of Metal Radio years back – and it kinda feels coming full circle to get to talk you about a new record. “The Estuary” is the reason why we’re here and I would like to start by asking how does it feel to get an album out, finally?

That’s great to hear and very much appreciated, thanks. It feels very good to be back. There were times when we couldn’t imagine there would be another album.

Were you anyhow apreheensive about the reactions of your old fans? After all, it’s been a longe absence…

We didn’t know what to expect. As you’ve said we’ve been out of the public eye for quite a while and with so much new music being released month by month we didn’t know how many people would still remember us. But the response so far has been overwhelming from both old and new supporters. It seems we haven’t been forgotten and many people are only discovering us now.

On my opinion this record show you guys better than ever! Did you had any real sense of the direction where to go musically or did you just let it flow?

Thank you. We just let it flow as we always did. Obviously Siffi (vocals/ guitar) and me have worked together for a very long time and have developed our own handwriting. But without our new members Hans (bass/ vocals) and Rainer (drums), “The Estuary” wouldn’t exist. Everyone had a big part in it,  contributed and left his mark. Yet people keep telling us the new record sounds unmistabably like Mirror of Deception.

You had an hiatus after the split “Imperial Anthems No.8”… and it’s kind a silly question but if it was today do you think you’ve needed to go through that? That it was the best way get back more powerful than ever?

Yes, I agree. In hindsight I think the former line-up had run its’ course creatively after almost 10 years, 3 albums and various other recordings together. We’ve had dark and uncertain times as a band but it all paid off in the end. We were lucky to find the right people, we grew together as a band, we wrote songs, played live and at some point we booked into the studio. Our old friend Michelle Darkness (End of Green vocalist) handled the production and became our fifth bandmember during the recordings. He followed our path as a band since almost day one and knew exactly what was needed. And his bandmate Oliver Merkle created the artwork. We’re very lucky to have such a great network of friends who helped to make this happen.

Like you said, the line-up also changed… do you feel that now you are tight and solid to endure and focus more on Mirror Of Deception? What have changed on this post-hiatus period?

There is a different kind of energy and creativity flowing. We are all in our 40s and have our lives, families, jobs and responsibilities. So it’s a bit harder to balanace and manage band activites than 15 or 20 years ago. We will do whatever is possible for us.

You’ve released the album independently, did you’ve tried looking for a label or did you wanted to maintain full control of your work?

We’ve had interrest from labels. But in the end it was as you guessed about maintaining control and working on our own terms and schedules. It takes a lot of work and money to record, release, promote and distribute an álbum all by yourself. Still we’re sure though it will work out for us for this one. We will see what the future brings.

Can we expect to see Mirror Of Deception live? At least outside of Germany… any plans to storm the rest of Europe?

Sure, we’d like to play outside Germany again as well. We have been to 12 different coutries so far but we haven’t been much in the south of Europe yet. You’re very welcome to recommend us to your local bookers and festival organizers.

You guys are veterans, in the game since the 90’s. Doom Metal was never a popular genre although it has faced some favorouble times. From my perspective, it seems that there’s an increasing interest on the genre… do you agree? What are the feelings you have about it?

The scene has definitely grown a lot since we first started out. Much more bands, tours, festivals and in general a bigger audience. It’s thriving. The downside is a much shorter attention span for individual bands and albums and I do also notice less indiviuality and a bit of a monoculture in regards to sound, approach, lyrical themes and aesthetics.

Thanks for this interview, greetings from Portugal!