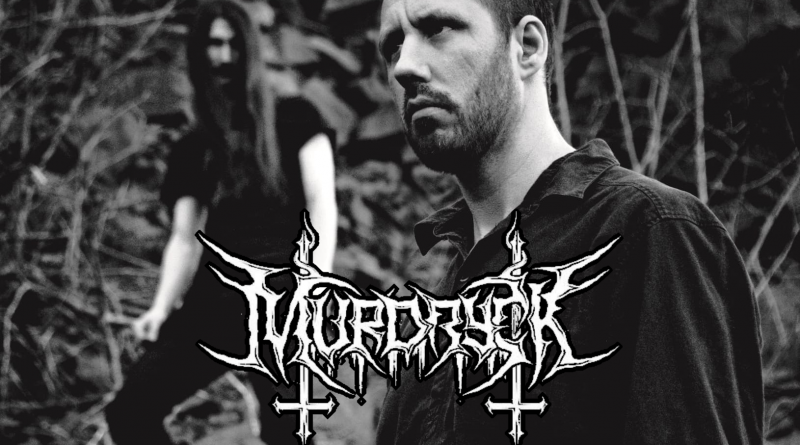 Murdryck may well started their career as a darkwave/ambient project but since 2014 that they focus on black metal and “Födelsen” is their second album. And we all only gained in the process because this is a really fierce entity. Skärseld is Murdryck‘s mastermind and unveiled some of his secrets.

Hello guys and welcome to our World Of Metal. Before I congratulate you for the stellar work in your sophomore album “Födelsen” I must start by asking about the sound evolution you’ve faced until you got to the present moment. You started of as a dark ambient project, how was the path to becoming a fierce black metal band.

There was no path, really. Murdryck had been dormant so many years that really it has no connection to the past. It’s become an albatross around the neck as all reviews and interviews can’t help themselves from mentioning Dark Ambient like it’s the most interesting thing about the band. The short story is that I just wanted to retain the name, since it was unique. There’s over 100,000 metal bands registered on Metal Archives and stringing words together to create new band names has gotten pretty stale.

And if compare the two albums, “Födelsen” with your debut “Antologi MMXV”, what would be the primary evolution for you as a composer and musician?

With the first album, I just wanted to put something out that was complete and my own work. I wanted to see a project through from start to finish and have it a released as a proper package. I wanted to do an album with songs that were produced and mixed properly and released on a CD. I’ve spent years making all kinds of extreme music but never really doing more than demos, often instrumentally. “Födelsen” is the next step in our development and you can hear that the songs have matured over the previous CD. I still have not reached my ultimate vision musically or artistically but it’s getting closer. The most important thing is that I enjoy what we write and record. I do this totally for myself. If people like it along the way that’s great.

In “Födelsen” you present an almost completely new band. Did this have a crucial impact on the songs that we can hear? How much input did the new members had on the album?

Murdryck’s albums (in the Black Metal incarnation) have always been a two-man affair. With the exception of half a song on the debut, I’ve written everything musically and now have to take charge of the lyrics. The new members had very little impact other than with some arrangement issues or minor details to help improve the songs. This will change on the next release.

The sound is quite dynamic, with lots of different influences converging in the final result but without drifting further away from black metal. Did you had an extra effort to not sounding just like your regular scandinavian black metal band?

There’s no extra effort. I just write what I like and in my style and I don’t try to actively imitate any particular band. I made an effort to have variation but try and keep consistency and I think I nearly did that. I don’t listen to much current music and I definitely don’t look at what is trendy and try to stylise the music to gain a wider audience. People hear influences and make comparisons but we can firmly say we are not a clone of any band. What some people criticise us for, others totally love and vice-versa. We might be more successful if we did the “ritual Black Metal” thing, or the super melodic shit with some chords and no-bass clinical production but that’s not me. I write what I want.

The last album had its concept in charge of Gast, your previous vocalist. How about this one, did you wanted to focus on any kind of specific subject or was something that came from Galar’s inspiration?

Gast was the main lyric writer in the band and contributed two new lyrics to this album since those songs were written while he was active in Murdryck. Galar didn’t really contribute much more to this album other than his voice and a few arrangement details but gave his opinion on things along the way. The follow up mini-album to Födelsen will be different though. We are making a conscious effort that Galar will have more involvement in how the vocals are delivered and even part of the song writing and a performing credit for bass guitar. I want him to have more input to mix up the music a bit but also so I don’t have to do everything except sing.

Accomplishing two decades of history it’s no easy task, even that for some part of the public, you’re a new band. You’ve lived different stages of the black metal scene, how do you compare the scene now and then?

I’ve never been involved in a scene back then or now. I guess in some respects, working with a label for the first album and then doing our own label and hiring a marketing person to get us press means we are part of some kind of scene, but it’s just likes on social media and interviews/reviews in magazines we never get to read. I feel quite disassociated from everything, to be honest. The album has been successful though and main expenses covered.

Is Murdryck going to do some kind of live promotion for this album? We know that you don’t tour but will you appear on stages outside your country?

No live promotion. If we do gigs it will be on a one-off basis only and highly unlikely.

Changed line-ups a few times in the past, do you feel this one is your most strong ever?

As a recording line-up the most important members are me and Galar. I am very happy with our working relationship and what he can deliver and we share the same vision and goals for how we want the band to proceed and the overall direction. He has a really great voice for this music and I think he will help carve an identity for the band with that voice. I don’t think I could find someone that I can work with in the same capacity and deliver what he delivers.

What would be the biggest accomplishment for Murdryck?

I just want to be in a place where I can release music on physical formats to a high standard and can afford to increase the production size of everything. I want to scale it all up from the songwriting to the mix to artistic package you hold in your hand. As long as people support us and buy the albums, digitally or physical, then we can continue. People need to put their money where their mouths is. There’s too much vanity on social media with how many likes you have. Who gives a fuck how many likes you have if no-one purchases anything.