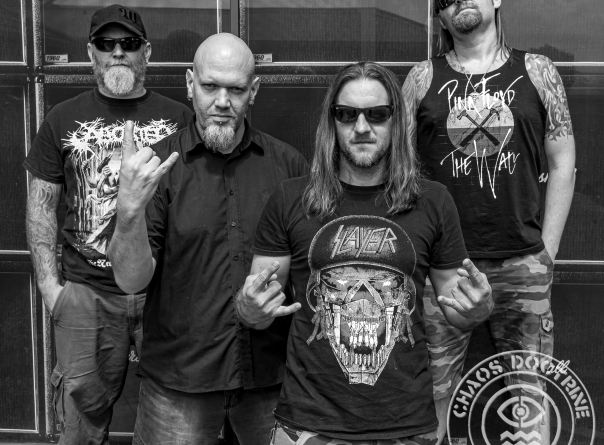 Clocking in at 180 bpm, “Father Grigori” digs into the life and times of the infamous Russian Monk Grigori Rasputin. It opens with a long and eerie intro that sets the scene brilliantly before breaking into ruthless thrashy verses and choruses that groove like the best. It also showcases huge symphonics, blended perfectly with a mammoth solo by SA veteran guitarist Alec Surridge. It ends in the same eerie way it started, leaving you wanting more!

This ferocious track blends Old School Thrash and Death Metal with heavy Industrial elements that has become Chaos Doctrine’s signature sound, since their self-titled debut album in 2018. However, there are big advances in production, tightness and the overall anger of the band in their delivery – clearly showing that the band is at a new level.

“Father Grigori” is the first single from Chaos Doctrine’s forthcoming sophomore album (the name of which will be released soon) – the band’s last with their previous line-up, since the departure of drummer Ralph and guitarist Ray. This single was masterfully produced by guitarist Alec Surridge, who is also mixing and mastering the entire album at the band’s Gemini AD Studios. Below you can watch de lyric vídeo for “Father Grigori”:

The Lyric Video for FATHER GRIGORI was made by bassist and backing vocalist Phil Carstens, whose striking visual work has become synonymous with the band’s multi-sensory assault. What you see is what you hear, and it is Heavy Metal! Phil had this to say about the track: “Father Grigori has become my favourite Chaos Doctrine song. It seamlessly transitions from speed to groove and has some melody with Alec’s excellent guitar solos, topped off with some aggressive lyrics from Dr D. There is some space in the song for a few extra bass notes, that makes it really fun to play as well”!

Guitarist Alec Surridge adds: “For me, this track has a seriously cool level of anxiety or stress to it. The riffs are mean, heavy and fast, but at the same time there are sections that have melody; something that hasn’t been that prevalent in previous Chaos Doctrine tracks. These are countered by the vocals and the theme of the lyrics”.

Vocalist Daniel Burger (Dr D) concludes that “Father Grigori was the last track we wrote for the new album, but it was so ferocious that we decided that it has to be our first single. I have always been fascinated by Rasputin and I think this track reflects his chaotic and mysterious legacy!”.